The recent news about Minnesota's projected $1 billion surplus, not to mention their low unemployment and great jobs numbers, angered a lot of "stand with Walker" losers about some peoples loyalty to Wisconsin. Their typical comeback is, "if you like prosperity so much, why don't you move there."

Don't get me wrong, I'm fully aware of the time it will take for Walker's plan to show any results, surely more than the 6 months they gave President Obama when he tried to bring us out of the Great Recession.

As a life long Wisconsin resident it's unsettling to watch the Republicans retool the state, wiping out nearly a century of progress, just so we could put in place a boiler plate template of Louisiana or Mississippi. 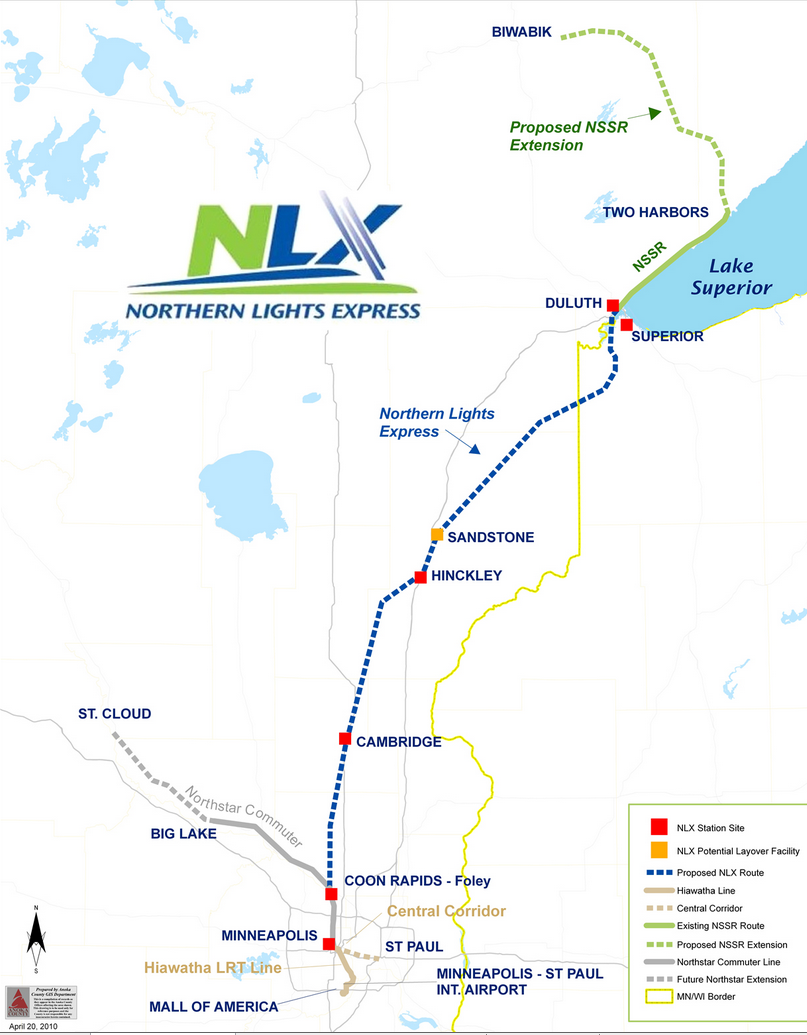 The Northern Lights Express would run along existing BNSF railway track from the Twin Cities to Hinckley, Minnesota, at which point it would cross the border into Wisconsin and stop in Superior and Duluth. Superior Planning and Ports Director Jason Serck said that passenger rail could boost the city’s economy. “Exposing people to Superior and getting them to get out of the train, see Superior, essentially spend money, is something we see as beneficial,” he said.

Not quite as exciting as the proposed link tying Chicago to Kenosha, Milwaukee and then Madison, but a great idea never-the-less. No amount of jobs or business development could change Walker's mind on that morally outrageous proposal. Yet take a look at what a planned northern route connecting the Twin Cities to Superior and points north might do:

2. Spur approximately $2 billion in development along the  155 mile corridor;

4. Provide an environmental sound alternative to automobiles that can be used for business and tourism.

5. Local cities and counties in the corridor have invested more than $2 million
Under President Bush's administration, NLX was designated one of eight top priorities for development by the National Passenger Rail Study Group, headed by the U.S. Secretary of Transportation.

Not a bad plan for jobs and business. Think what might have happened regionally in southeastern Wisconsin and Illinois with a similar high speed rail system.


Wisconsin’s Department of Transportation is working with Minnesota as needed on the plan. The plan’s project manager Dave Christianson said the Northern Lights Express said it may cost up to $1 billion to build in the Twin Ports.

“About 30,000 riders a year would probably come out of Superior. It would be up to Douglas County and the city of Superior to develop the station,” he said. Christianson said they’re looking mostly for federal dollars and seeking congressional support for the project.

Ironic Hypocrisy:  Funny thing, Republicans opposed Obama's stimulus and high speed rail idea because the jobs were temporary, yet they love the Keystone XL pipeline jobs, with a predicted life span of one year.