Rolling in Budget Surpluses, Walker and Van Hollen throw taxpayer money away on a Lawsuit against Obama's Immigration policy.

For a party that so often complained about the court usurping the legislative will of the people, Republicans have amazingly change course, using the now politicized judicial branch to help get their way hook or by crook. In fact, I heard a caller on the radio the other day casually mention that it's okay to put an age cap on our state supreme court justices, because it's just a "political position." It is?

If the Republican objective is to sour the peoples interest in our government and its lawmakers, then they're doing a fantastic job of it. I hate everything about it.

Who cares about actual jobs and policy that would make our lives even better, Scott Walker's got a national image to create, and suing the president puts him right in the mix.

Don't think for one moment any of the lawsuits or limits that might be forced on Obama this time around will mean anything for a possible Republican ruler.

Making sure his place in the White House will scare off any challenger with a bunch of seasoned court happy attorneys and think tanks, Walker stepped into the spotlight. jsonline: 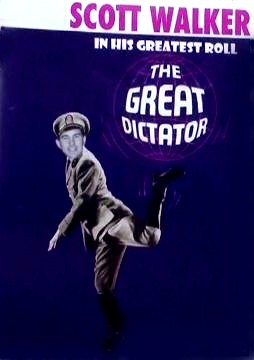 Gov. Scott Walker said: "The immigration system is broken, but this is an issue that should be addressed through collaborative federal action, not unilateral action by the President. President Obama's actions represent a violation of his constitutional duty to faithfully execute the laws and exceed the limits of his administrative powers. Because of our shared concerns, at my direction, Wisconsin joined with Governors and Attorneys General from 17 other states in a lawsuit seeking to block the President's unilateral action to change the law outside of the legislative process. To be clear, this lawsuit is not about immigration. It is about the rule of law and the legality of President Obama's actions."

Wisconsin Attorney General J.B. Van Hollen said: "It is clear that the president has exceeded his authority and that this important matter should be reviewed by the courts."

What forced Walker to draw more attention to himself?

The lawsuit raises three objections: that Obama violated the "Take Care Clause" of the U.S. Constitution that limits the scope of presidential power; that the federal government violated rulemaking procedures; and that the order will "exacerbate the humanitarian crisis along the southern border, which will affect increased state investment in law enforcement, health care and education."

With taxpayer money to burn, Walker's got good company: