Walker projected deficits getting more national criticism than from his base of supposed "fiscal conservatives" in Wisconsin.

Because the holidays have been a bit on the frantic side, I will news dump this Bloomberg story about Scott Walker's inability to manage state revenues. The criticism is self contained, so add this to the list of negative national coverage Walker has managed to accumulate over the past few months. The only ones not yet taking notice...Republican constituents, who are giving new meaning to the term "low information voter:" 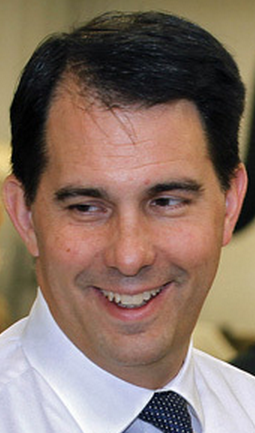 Wisconsin Governor Scott Walker has his eye on the Republican presidential nomination in 2016, and as he tries to boost his national poll numbers, there are numbers at home that also bear watching -- his state’s finances.

Tax cuts and Medicaid spending are contributing to a projected budget deficit that may reach $2.2 billion in the two-year period starting in July 2015, according to his administration’s analysts …  Walker aides call the projections premature … Last week, he called for more property-tax cuts.

Tax collections for this fiscal year through November were 2.1 percent below the same period last year, according to state figures. The Department of Administration had forecast that collections for the year through June 2015 would be up 5 percent. Investors in the $3.6 trillion municipal-bond market have yet to penalize the state.

One of Walker’s primary campaign themes, that he eliminated a $3.6 billion deficit inherited in 2011 from his predecessor, Democratic Governor Jim Doyle, now has the potential to work against him. Estimates of the next budget shortfall range from about $800 million from the nonpartisan Legislative Fiscal Bureau, to the $2.2 billion forecast from Walker’s own analysts.

The fiscal volatility is familiar to Todd Berry, president of the Wisconsin Taxpayers Alliance, “Wisconsin is politically incapable, with a fulltime, professional and highly partisan legislature, to do anything that looks at finances over the long-term,” Berry said. Medicaid spending is adding to budget pressures. The health-care program for the poor, covering about one in five Wisconsin residents, represents about $760 million in proposed new spending in the 2016-2017 spending plan, Berry said.

Total expenditures this fiscal year are expected to exceed revenue by about $650 million, according to Walker’s budget analysts. “The problem is they’ve cut revenue permanently, with tax cuts, but not cut spending permanently,” Berry said.