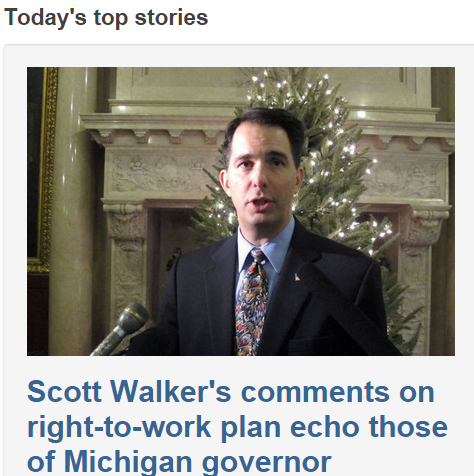 After a massive campaign by outraged conservative voters to portray Scott Walker's challenger Mary Burke as a plagiarist, our clueless governor came out swinging with a wonderfully plagiarized talking point used by Michigan Governor Rick Snyder. "Right-to-work is not a priority..." is even getting major media attention, an oddity to say the least. Pic from the WSJ.

Our incidental governor will probably sign a bill into law in a heartbeat out of shear frustration, just to get it off the table so he can continue to focus on jobs, jobs, and his job to become president.
And when you hear Sen. Scott Fitzgerald talk about how much he's asked about right-to-work from voters, like Diane Hendricks below, it's easy who he's rubbing shoulders with:

William Jones, a UW-Madison history professor, cited comments Walker made to Beloit billionaire Diane Hendricks, a prominent GOP donor, in January 2011. Hendricks had asked Walker whether lawmakers could make Wisconsin a “completely red state” and “become a right-to-work (state).” Walker replied that the “first step” was public employee unions, “because you use divide and conquer.”

“I think it’s clear that he supports this type of thing,” Jones said.

The MO is the same too, as GOP governors basically retaliate against their opponents when huge crowds of protesters turn out. A kind of "lesson" they're trying to teach us, the rabble and uninformed.


Gov. Snyder had repeatedly said right-to-work legislation was a divisive issue, wasn’t a priority for him, and was not on his agenda. Then he signed the Michigan bill in December 2012, the same day the measure passed in the GOP-controlled statehouse, which was filled with protesters.

Walker sponsored a right-to-work bill as a freshman Assembly member in 1993. But he has said in recent months, and repeated Friday, that he would prefer lawmakers focus on his priorities, such as cutting taxes, expanding school choice, and passing a state budget.