Reaganomics started Supply Side Slide, killing the Middle Class, and Republicans are about to shift that into overdrive.

In the last few years of the Clinton administration, incomes peaked for most Wisconsinites. But according to the chart below, Milwaukee County peaked in 1969, and Racine County, 1979. 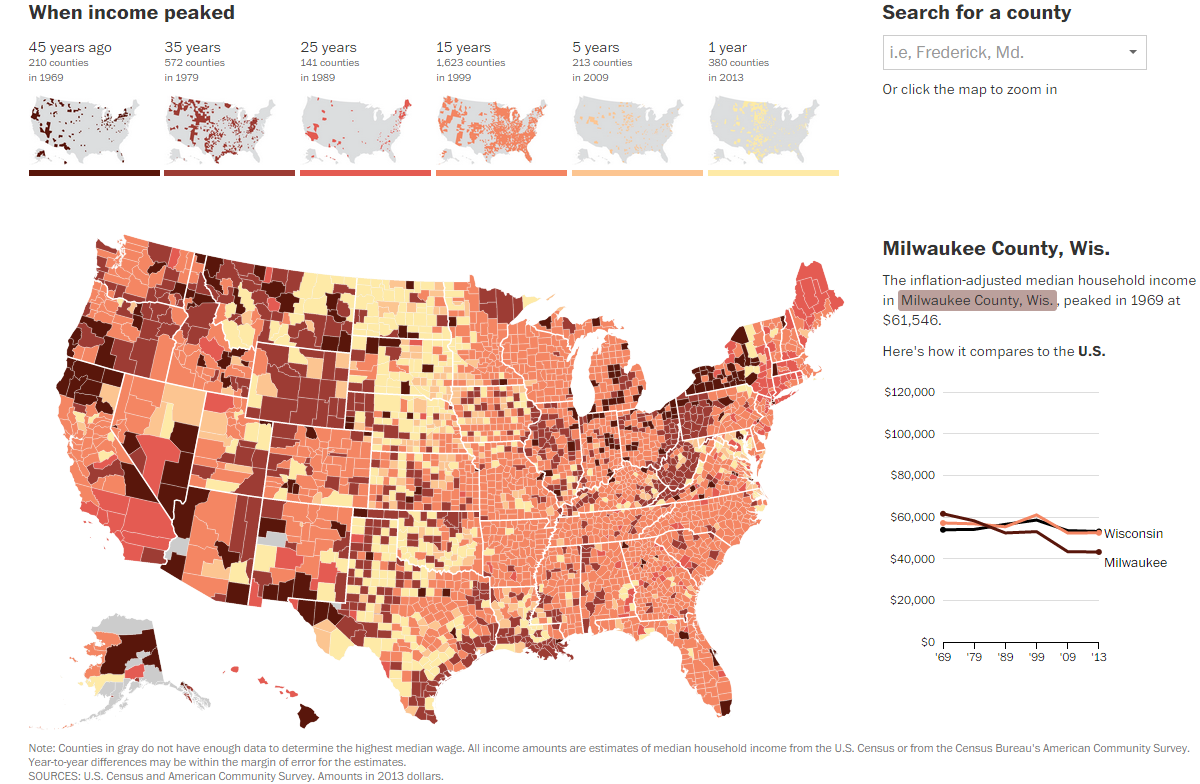 A recent Washington Post piece laid it out before us. You'll notice that before Ronald Reagan, things were normal and predictable:


From the Great Depression through the 1980s, American recessions and recoveries followed a pattern: Employers shed jobs when the economy turned south but added them back quickly once it recovered.

With the new Republican majority in D.C., and GOP dominance in 30 states, the anger and unhappiness of the American lower and middle class is bound to increase. But oddly, during uncertain times, people look to the more conservative party for help. Good luck with that:


The middle class took America to the moon. Then something went horribly wrong.

Yes, the stock market is soaring, the unemployment rate is finally retreating after the Great Recession and the economy added 321,000 jobs last month. But all that growth has done nothing to boost pay for the typical American worker ... over the past 25 years, the economy has grown 83 percent, after adjusting for inflation — and the typical family’s income hasn't budged.

In that time, corporate profits doubled as a share of the economy. Workers today produce nearly twice as many goods and services per hour on the job as they did in 1989, but as a group, they get less of the nation’s economic pie.

In 81 percent of America’s counties, the median income is lower today than it was 15 years ago.

Even before the 2008 crisis, the 2000's were on track to be the weakest decade for job creation since the Labor Department started tracking the statistics.

It’s the reason why tax cuts, stimulus spending and rock-bottom interest rates haven’t jolted the middle class back to its postwar prosperity.

If you read anything this week, check out the following, before I post a highly edited summary:


Paul Fanlund: No end in sight to Wisconsin’s politics of resentment