House Republicans have been getting away with murder. Americans would be stunned if they knew what was in most of their passed legislation. Unfortunately, the media spends all its time showcasing the political blowhards taking shots at Obama instead.

A little noticed part of the recently passed budget giveaway to Republicans included this bizarre must have:

Prohibits the EPA from regulating lead in ammunition or fishing tackle. Lead in fishing sinkers and bullet fragments are being blamed for poisoning birds, such as loons and the endangered California condor. Republicans said EPA regulation would be overreach and just the threat of it was making it hard to find bullets in stores.

We'd hate to see the marketplace lose money or change for the better. 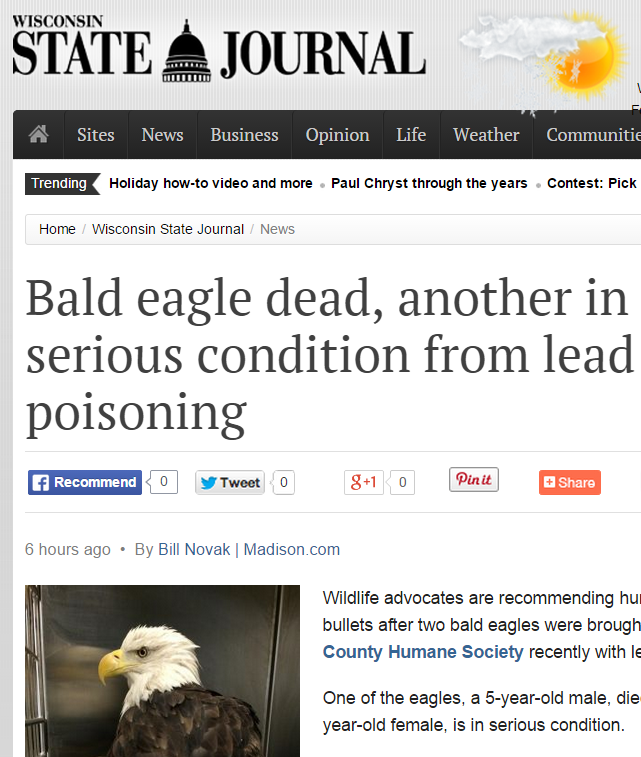 Wildlife advocates are recommending hunters use nontoxic bullets after two bald eagles were brought to the Dane County Humane Society recently with lead poisoning. One of the eagles, a 5-year-old male, died. The other, a 21-year-old female, is in serious condition. The lead most likely was ingested by the eagles when they fed on the carcasses of deer, pheasants or other wildlife that had been shot, or from live waterfowl that had ingested lead and then were eaten by the eagles.

The GOP hatred for environmental protection has now succeeded in taking the country back to 1989:


The agency gets $8.1 billion, down $60 million from the last fiscal year. The agency's budget has been slashed by $2.2 billion, or 21 percent, since fiscal 2010, according to GOP aides. The cuts mean that EPA will have to reduce its staffing to the lowest levels since 1989.