There's a reason there are so many stories predicting the end of the Affordable Care Act's exchanges. But the real story is not getting media coverage; insurers simply found out they can't compete with each other by lowering their prices, the underlying free market idea that would make Paul Ryan's supposed "patient centered" reform so successful.

So over the weekend, I responded to the story below with a few comments of my own:

Taxpayers on the Hook as Obamacare Exchanges Near the Edge of Collapse: UnitedHealth is pulling out completely, Humana is pulling out of 88 percent of counties it was in, and last weak Aetna strongly suggested it will be exiting, too, unless it gets bribed to stay with a huge, annual infusion of direct corporate bailout payments from taxpayers. Obamacare supporters need to be held accountable for the law’s manifest failures – not permitted to paper them over with billions more of our tax dollars.

Of the two rightwing rants, the last response pretty much encapsulates the survivalist world view of conservative voters everywhere. It's been that one thing that divides us on health care; do we save people or let them die. It's enough to give you a chill:

1. Democurmudgeon • 2 days ago
No one’s talking about the elephant in the room: Insurers are dropping out because they're losing money competing, lowering their prices to gain customers. The marketplaces simply proved insurers can't survive by competing and dropping the sick to boost their bottom lines. Now what, junk policies under the Republican plan that covers fewer medical issues and includes small print exclusions? Yup.

DanB_Tiffin  Democurmudgeon • 2 days ago
The liberal is pulling out the 'pity, pity, pity' statements and complaining about the 'evil insurance companies'. Same worthless emotional arguments those snivelers always have.
These sniveling liberals could still (plenty of rich ones!) start their own insurance company or mutual company or something to provide health insurance at a ‘‘fair’’ price. Wow, without the obscene profits, they could compete in the open market at a very low price. Obviously, besides serving themselves, they could take all sorts of current customers away from the bad, evil, big insurance companies.
That is, of course, if the liberals are capable of taking real action. Maybe they are only good at whining, sniveling, and wanting their Mommy (government) to fix everything for them.

2. Democurmudgeon  Crucisnh • 2 days ago
Who covers and pays for those with preexisting conditions...oops, forgot to think past your ideology. 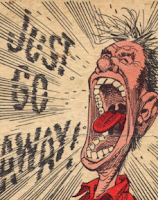