DNR Sec. Stepp says, "Hey, Wisconsin knows how to do it right," as she backs off protecting our drinking water.

Republican governors should be scary the daylights out of Americans everywhere. They don't care at all about our drinking water, rivers and lakes. 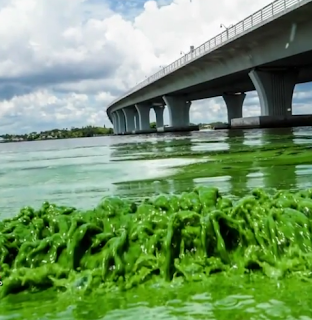 Florida made national news for being coated in thick, green, toxic algae. It looked like a river of snot. It smelled worse. And it mangled the economy along the St. Lucie River and Treasure Coast. Florida officials responded ... by voting to allow more cancer-causing agents into the Sunshine State's drinking water supplies and recreational waters. No, I'm not kidding.

They allow companies, developers and homeowners to pave and foul the land — and then charge taxpayers billions to clean it up. Fiscal conservatism, my asphalt. People worried about clean air or water were labeled as "job killers." Now we're spending $8 billion repairing the Everglades. we keep electing politicians who foul the land and then stick us with the bill.

1. After Walker’s office notified farm industry lobbyists, the state Dairy Business Association met with DNR officials and complained about the potential cost of new rules, prompting the agency to narrow their scope.

3. Instead of stronger regulation of manure at CAFOs (concentrated animal feeding operations) statewide, any new rules will apply only in yet-to-be-defined sensitive areas where groundwater is especially vulnerable.

4. The plans were changed without notification of people affected by polluted lakes, streams and wells.

5. Kewaunee County has been hard hit for many years, and residents expressed impatience, but Stepp said the DNR couldn’t begin to act until scientific evidence was in place.

Really, balancing “everyone’s” interests, even Wisconsinites who have had their drinking water contaminated or will have it contaminated when even more CAFO’s are approved?

Thankfully one "adult" was in the room to reassure everyone, with this amazingly juvenile statement:

“I know we are going to stand up at the end of the process and say, ‘Hey, Wisconsin knows how to do it right’,” DNR secretary Cathy Stepp said.

That's right up there with Tony the Tigers "They're great."

As Charlie Pierce put it:


WSJ: "But conservationists said the narrowed rule-making plan delayed indefinitely the consideration of public health and water resources protections that were identified through lengthy scientific study and extensive public discussion."

But, seriously. "Lengthy scientific study"? "Extensive public discussion"? We'll have none of that, people. Not here in Wisconsin, where neither the government nor the rivers and streams are transparent any more.