Walker blasts Clinton for "inflaming the situation" after she simply asked Milwaukee to "rebuild trust" between community and police.

Well, this Hillary Clinton comment about the unrest in Milwaukee seemed harmless enough...


Clinton said that the shooting and riots in Milwaukee demonstrated that police and communities need to "rebuild trust," so that "everyone has respect for the law and is respected by the law."

And yet Scott Walker - after having once compared Wisconsin protesters with ISIS - thought Clinton's comments just made matters worse? Seeing a chance to exploit a bad situation....Business Insider: 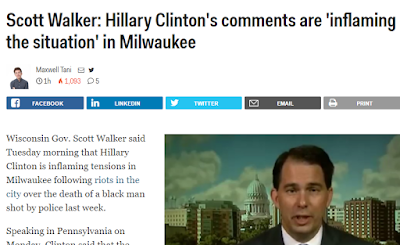 Wisconsin Gov. Scott Walker said Tuesday morning that Hillary Clinton is inflaming tensions in Milwaukee following riots in the city over the death of a black man shot by police last week ... both Clinton and Obama of making the situation in the city worse, though he did not specify how.


"I think comments like that are just inflaming the situation. I think people understand in that neighborhood, in Sherman Park and Milwaukee, they want the law enforcement to step up and protect them. The people who live in that neighborhood want police in Milwaukee and the sheriff's department to step up and protect them. They don't want the criminals who are doing those actions against those businesses to do that. I think statements like that and the lack of leadership we've had from the president on this issue only inflames the situation."

Someone's going to have to explain to me how "rebuild trust," and hope "everyone has respect for the law and is respected by the law" "inflames the situation?"
Posted by John Peterson, Democurmudgeon at 8/16/2016 11:04:00 AM