Trump would use Gitmo to interrogate Americans.

Getting tired of this? Not Republicans, who probably think this "tell it like it is" idea makes sense too. Republicans own this guy: 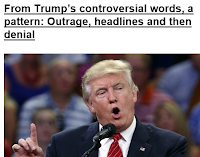 Huffington Post: Donald Trump once again threw legality into the wind, suggesting that Americans could be tried at Guantánamo Bay if he’s president. As the Miami Herald points out, that’s against current U.S. law. Trump told the Herald on Thursday that it “would be fine” for military tribunals at the infamous detention center to prosecute U.S. citizens suspected of terrorism. “I know that they want to try them in our regular court systems, and I don’t like that at all,” the GOP presidential nominee said.

But some Republicans are already washing their hands of Trump, despite naming him as their presidential candidate...which means, good luck with that: