Wisconsin media reporting has reached a new ridiculous low with this recent story:


"Wisconsin lags behind other states in internet speeds, a new report shows, although gains have been made..."

Hey, that's not so bad, right, we're making gains? In the very next sentence, those "gains" don't seem so important: 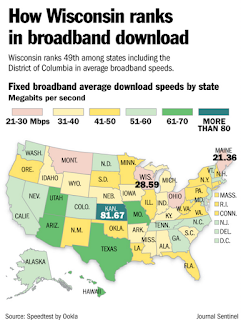 Wisconsin ranks 49th among states and the District of Columbia in the average download internet speed for a wired connection, according to the report from Speedtest, a Seattle technology firm.

Well thank you Scott Walker, for all that you've done leaving it up to the free market that decided to do nothing without taxpayer handouts.

Instead of seeing this as a job killer, the JS article instead reassured Netflix users they could still watch movies:


The 28.59 megabits per second is still more than adequate for most internet users watching a movie on Netflix or telecommuting.

Way back on August 23, 2015, Walker turned away $23 million from the federal government:


The state is turning down $23 million because state taxpayers would have been on the hook for the entire amount if the state could not meet the grant's precise requirements, Mike Huebsch, secretary of the state Department of Administration, said.

Walker instead took away those consumer/taxpayer safeguards and requirements:

"Broadband Forward! Community certification is a welcome mat for more broadband investment. A streamlined permitting process and reasonable fee structure is a win-win for everyone involved.”

Well, maybe not everyone getting "streamlined" over. So Walker thought he could look like a broadband hero by giving a little over a million bucks to expansion:

In 2015, Governor Walker and the Wisconsin Legislature tripled the amount of funding for broadband expansion grants to $1.5 million annually, with a total of $6 million allocated from the Universal Service Fund cash reserves to fund grants over a four-year period ... the program’s $1.5 million combines with local and private matching funds.

Putting that $1.5 million in perspective statewide:

Minnesota again beat out Wisconsin with an even wiser investment in the future: