I have to admit, every time I see Scott Walker seek out a new target, it's like seeing a cockroach scurrying across the floor, seeking out another GOP trashed Democrat to feed on.

And so it is with The Clinton Foundation. Walker hates charitable help for people and saving lives, because it gets in the way of someone making a profit.

Yea, shut it down, what the heck. Don't bother us with a complicated transfer of control or even more transparency, we want it closed down to make it seem like Hillary is admitting to being corrupt. Blame, punish and win, that's the GOP mantra.

Just an aside, but for the last decade all we've been hearing from Republicans is how money does not have an influence on their political decisions, and that unless you can prove it, shut the hell up. But that's not how it works for Democrats, and that double standard is by design.

Like any organization put under the microscope, problems and lapses of procedure will turn up. Want a thorough list? The Hill (link here) details the big ones that are more nuanced than Republicans would have you believe.

But what does the Clinton Foundation do that Scott Walker would simply shut down to win this political skirmish? Fortune Magazine offers a look at many of the things the world could do without, at least according to Scott Walker:


The foundation has a wide array of initiatives: promoting economic equality for women, boosting entrepreneurship in emerging markets and tackling climate change.

It is perhaps best known for its health care initiatives … The Clinton Global Initiative (CGI). (It’s) a launching pad for programs by bringing together a variety of stakeholders, including NGOs, executives, entrepreneurs, politicians, and others, who then commit to various ambitious projects.  Since 2005, according to CGI, it has spawned initiatives that:


1. In 2015 the infant and maternal health group Embrace Innovations pledged to bring its innovative Embrace infant warmer (which doesn’t require a fixed electricity source) to 100,000 babies in sub-Saharan Africa and South Asia.

2. Raised $313 million for R&D into new vaccines and medicines.

4. Provided treatment for more than 36 million people with tropical diseases.

6. The Foundation collaboration with the American Heart Association (AHA) called the Alliance for a Healthier Generation, has helped provide access to healthier meals across more than 31,000 American schools and boosted physical education, the availability of nutritious meals, and extracurricular exercise in poor communities with high obesity rates.

7. The Clinton Health Access Initiative (CHAI), which is an independent entity of the Clinton Foundation, may have had the most wide-ranging impact on global public health to date. It has helped negotiate HIV/AIDS therapy price cuts as high as 90%, ensuring access to these treatments for more than 11.5 million people across more than 70 countries, CHAI says.

Besides the thousands of Foundation workers that would lose their jobs, just how open will most charities be after this media trashing? Come to think of it, don't you just hate all these phony charities now? 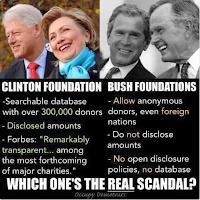 CharityWatch gives the organization a solid “A.” The group says that the foundation spent 88% of its 2014 outlays directly on programs (rather than overhead) and that it only has to spend $2 to raise $100.

The available data indicates that the Clinton Foundation is a top-tier institution in the philanthropic world, according to CharityWatch president Daniel Borochoff, who also says the foreign fundraising criticisms made about the organization could be applied to any number of international charities. “And by those accounts, the Clinton Foundation has a strong record. They reveal much more information about themselves than many other charities.”

I just found this Americablog statement from the editor. The clip is low quality audio, but does make the case why getting rid of the Clinton Foundation is a bad idea: