Trump's Campaign Chief investigated for looting Ukrainian assets & influencing elections to the tune of $12 million..that's all.

Trump's sleazy campaign manager is part of a corruption investigation that mixed $12 million of business influence into Ukrainian and Russian politics. And coincidentally, there's still the likely Russian hacking of Democratic emails Paul Manafort could have used to try and sway the election here. Weird huh?

This would have, again, destroyed any other candidates campaign, but oddly not Trump? NY Times: 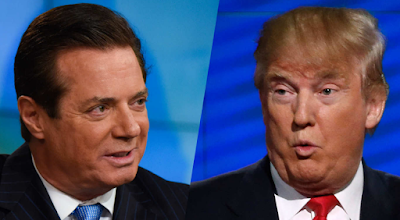 Secret Ledger in Ukraine Lists Cash for Donald Trump’s Campaign Chief: On a leafy side street off Independence Square in Kiev is an office used for years by Donald J. Trump’s campaign chairman, Paul Manafort, when he consulted for Ukraine’s ruling political party ... government investigators examining secret records have found his name, as well as companies he sought business with, as they try to untangle a corrupt network they say was used to loot Ukrainian assets and influence elections during the administration of Mr. Manafort’s main client, former President Viktor F. Yanukovych.

You can't make this stuff up. Imagine the uproar if the following described Clinton's campaign manager:


"...international consulting that has been a staple of Mr. Manafort’s business since the 1980s, when he went to work for the Philippine dictator Ferdinand Marcos. Before joining Mr. Trump’s campaign this spring, Mr. Manafort’s most prominent recent client was Mr. Yanukovych, who — like Mr. Marcos — was deposed in a popular uprising."

I'm typing this at the same time I'm listening radio host Mitch Henck, who's Bizarro World guest is blaming George Soro for the Ukrainian overthrow. While the right wing noise machine is busy at work, just keep this in mind:

In addition, criminal prosecutors are investigating a group of offshore shell companies that helped members of Mr. Yanukovych’s inner circle finance their lavish lifestyles, including a palatial presidential residence with a private zoo, golf course and tennis court. Among the hundreds of murky transactions these companies engaged in was an $18 million deal to sell Ukrainian cable television assets to a partnership put together by Mr. Manafort and a Russian oligarch, Oleg Deripaska, a close ally of President Vladimir V. Putin.


Go Trump? Yes, Manafort is now guiding Trump with everything he's learned, including these coincidental facts:


From Mr. Trump’s favorable statements about Mr. Putin and his annexation of Crimea to the suspected Russian hacking of Democrats’ emails — an examination of Mr. Manafort’s activities offers new details of how he mixed politics and business out of public view and benefited from powerful interests now under scrutiny by the new government in Kiev.

Anti-corruption officials there say the payments earmarked for Mr. Manafort, previously unreported, are a focus of their investigation, though they have yet to determine if he actually received the cash ... his lawyer, Richard A. Hibey, said Mr. Manafort had not received “any such cash payments” described by the anti-corruption officials ... “These are suspicions, and probably heavily politically tinged ones,”

The National Anti-Corruption Bureau, which obtained the ledger, said in a statement that Mr. Manafort’s name appeared 22 times in the documents over five years, with payments totaling $12.7 million. The purpose of the payments is not clear. Nor is the outcome, since the handwritten entries cannot be cross-referenced against banking records.