Your idea of freedom and liberty not the same as tea party/GOP!! Liberal Free Speech is a threat, subject to citizen arrest. 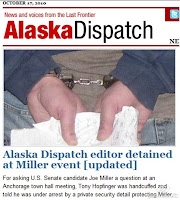 What follows is an amazing example of the authoritarian tendencies conservatives display when confronted with dissenting opinion, or questions from the press that are inconvenient (see picture). From the bizarre web site, Conservatives 4 Palin, check out the following common perspective by Ian Lazaran. I wish I were making this up:

Far-left Democrat Party partisan Josh Marshall from Talking Points Memo titles a blog post "Didn't Know You Could Do That" in reference to what transpired at a Joe Miller event yesterday afternoon. It's no surprise that the left-wing Marshall and the Democrat Party don't comprehend the "citizen's arrest" doctrine given their low level of intelligence. Alaska follows the common law "citizen's arrest" doctrine. A Washington Law Review comment notes that "[w]hen a citizen witnesses the commission of a misdemeanor, Alaska law allows that citizen to arrest the offender on the spot." The comment notes that Alaska law allows citizens to make warrantless arrests when a misdemeanor is committed in their presence.

I can understand why the Democrat Party and the left would be nervous about this doctrine. If it were applied with more regularity, Democrats and liberals would have to think twice about the threats that they employ on a daily basis.

Nothing defines the Tea Party rhetoric of freedom and liberty like the above comment. Apparently angry tea party protesters shouting down politicians at town halls are exercising their free speech rights, while angry liberal protesters or an inquiring press…are threatening!!!


It couldn’t be clearer.

Conservative John Dean wrote about this behavior in a July 14, 2006 Boston Globe piece titled, “Triumph of the authoritarian:

Candid and knowledgeable Republicans on the far right concede -- usually only when not speaking for attribution -- that they are not truly conservative. They do not like to talk about why they behave as they do, or even to reflect on it. Nonetheless, their leaders admit they like being in charge, and their followers grant they find comfort in strong leaders who make them feel safe.

This is what I gleaned from discussions with countless conservative leaders and
followers, over a decade of questioning. Authoritarian conservatives are, as
a researcher told me, "enemies of freedom, antidemocratic, antiequality, highly prejudiced, mean-spirited, power hungry, Machiavellian and amoral." And that's not just his view ... this is how these people have consistently described themselves when being anonymously tested, by the tens of thousands over the past several decades.

Authoritarianism's impact on contemporary conservatism is beyond question. Because this impact is still growing and has troubling (if not actually evil) implications, I hope that social scientists will begin to write about this issue for general readers.

We need to stop thinking we are dealing with traditional conservatives on the modern stage, and instead recognize that they've often been supplanted by authoritarians.