A big win in the midterms is such a sure thing for Wisconsin Republicans now, that the whole idea of "early voting" is just plain crazy, and no longer necessary. Oh, and did you know Sen. Russ Feingold has been at the forfront of the effort to energize Democrats and independents to vote early? And according to the recent polls, Americans now favor Demorats to win in November, even if its just by a few percentage points. The enthusiasm gap is disappearing.

Not surprizingly, Republicans were quick reassure liberal leaning students that early voting is just a lot of hype, and an election year scare tactic. (click on image to enlarge) 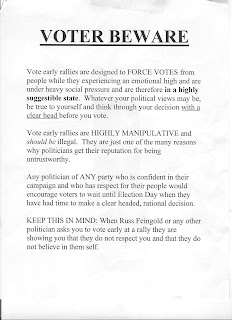 Below is the press release from Graeme Zielinski, Communications Director Democratic Party of Wisconsin:

Attached, you'll see a poster that a student at UW-Oshkosh found on campus in recent days.

It's an attack on early voting, but it gurgles some of the same feeble-minded rationales used to argue against Wisconsin's successful same-day registration, which we all should be proud to say leads to some of the highest voter turnout in our republic.

There is supposed to be an enthusiasm gap this election cycle. Haven't you read the papers and seen the photos of the angry people with their costumes?

But if that's so, if the advantage is there, why does a certain political party and
their sundries keep playing the dirtiest of tricks to stultify the electorate, to keep people at home on election day? To confuse and intimidate seniors and groups protected by the Voting Rights Act?