Offshore, and out of sight, Wind Farms Off East Coast Possible!! 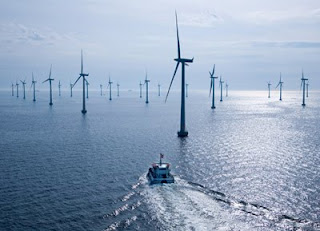 Google looks to wind energy, since no one else will:

Reuters: An ambitious proposal to build an offshore wind installation in the Atlantic Ocean that would deliver power to approximately 1.9 million households gained considerable financial support yesterday, when Google and Good Energies, a New York-based investment firm that specializes in renewable energy, each agreed to take a 37.5 percent stake in the initial development stage of the project.

The 350-mile Atlantic Wind Connection (AWC), which Trans-Elect Development hopes to start construction on by 2013, would stretch from New Jersey to Virginia and provide an underwater backbone at least 15 miles offshore for multiple wind farms. The first phase of the project, for which the estimated cost of construction is at least $5 billion, could go into service as early as 2016.

Writing on the Google blog, Rick Needham, the Green Business Operations Director for Google, stated “That's equivalent to 60 percent of the wind energy that was installed in the entire country last year."

However, as the New York Times reported, federal subsidies for the construction of wind power installations are scheduled to expire in 2012 … the project would even out energy costs across the region, which officials in Virginia, where such costs are cheapest, have always opposed, according to the Times.