Judge tells shocked conservatives they must have health care and take personal responsibility. 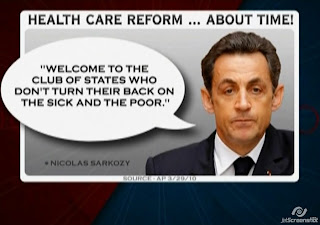 The first court decision is in, and it looks like personal responsibility won out when it comes to universal health care coverage.
NY Times: The first federal court decision on the constitutionality of the new health care reform law upheld its validity and dealt a well-deserved setback to opponents who are trying to overturn it.
The core issue is whether Congress has the power to require virtually everyone to carry health insurance starting in 2014 or pay a penalty. A conservative law firm based in Michigan filed suit, contending that Congress could not use its powers to regulate interstate commerce to require people to buy commercial health insurance. It argued that such people are not engaging in any activity that affects interstate commerce but are choosing not to engage in such activity.
Judge George Steeh of the Federal District Court in Detroit came down squarely on the side of the Obama administration. He ruled that a failure to buy health insurance was not “inactivity,” as the plaintiffs contended, but rather an economic decision to try to pay for health services later, out of pocket, rather than now, through the purchase of insurance … he ruled, such refusals to buy insurance would have an effect on interstate commerce.
When uninsured people find themselves unable to pay steep medical bills, their costs are shifted to hospitals, doctors, taxpayers and people who are covered by insurance.
The judge also found that the mandate to carry insurance was “an essential element” of health care reforms that will regulate a broad interstate market in health care services.