Re-inventing politics all the time, Republicans have again come up with a way to win at all costs: Invisibility. 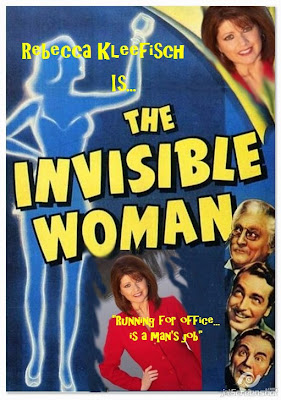 If you thought an experienced former TV news anchor would be confident enough to debate her Democratic challenger Tom Nelson, you would have been wrong. For a person a breath away from becoming governor, conservative voters don't care what Rebecca Kleefisch thinks, or if she is able to even form a thought, when it comes to running the states business. They just want to win.

On WTDY's Sly in the Morning, Lt. Governor candidate Tom Nelson explains the stunning turn of events and what has become a national conservative strategy, become invisible. Stick around for the surprise bizarre kicker involving her former TV stations offer to host a debate:

Democratic candidate for lieutenant governor Tom Nelson on Tuesday challenged his Republican opponent to a series of debates across northern Wisconsin. Rebecca Kleefisch's campaign isn't taking him up on the offer. It doesn't appear she will debate Nelson at all in the next month leading up to the Nov. 2 election.

Nelson, a state representative from Kaukauna, (said) "Every voter in Northeast Wisconsin and in every corner of the state ought to be outraged," Nelson said. "It is
completely unacceptable that a candidate for statewide office wouldn't agree to debate in any location at any time."

What makes this foot-in-mouth media avoidance more outrageously surreal is that Kleefisch was a professional news anchor:

Kleefisch, a former television news anchor from Oconomowoc, is following the playbook of running mate and GOP gubernatorial candidate Scott Walker, who
has passed on offers to debate outside of Milwaukee and Madison.

Wisconsin’s tea parties and Republican Party operatives were always big on meeting their representatives at town halls when they had the chance to shout down Democrats, but when it comes to debating their ideas, they aren’t just silent on their issues but they don’t even want to face the voting public.

It's a “silent takeover.”