When your schools go...away. Charter and Private Schools Don't Guarantee Anything, Even that they'll be there Tomorrow. 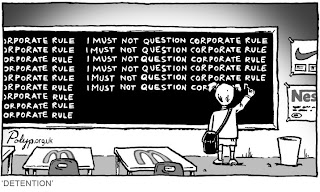 Imagine driving up to your nearest private charter school and finding out it closed down. Imagine that happening at a public school. That's the difference that should scare the daylights out of parents. From Ed Week's blog, there's even more to think about.

At first glance, the dramatic increase in the number of charter schools across the country seems to assure their place as the No. 1 player in the parental choice movement. ButOn Oct. 7, the New York Times focused on the LEARN School Network in Chicago ("Charter Education Expanding in Chicago"). Greg White, the chief executive, was forced to rely on two $1 million grants last month from Oprah Winfrey's Angel Network and the U.S. Department of Education to stay in business. LEARN was not alone.

Then on Oct. 9, the Los Angeles Times reported that Mike Piscal, the founder and operator of the Inner City Education Foundation, one of the nation's largest charter school companies, resigned because of a financial crisis that will result in midyear layoffs of an undetermined number of teachers ("Head of troubled charter school company resigns"). In an effort to keep ICEF afloat, former mayor Richard Riordan and philanthropist Eli Broad donated $100,000 and $500,000, respectively. In an editorial on Oct. 17, the Times attributed ICEF's troubles to hasty expansion, and concluded that charter schools aren't cure-alls ("Don't expect miracles").

What is troubling about the latest news is that it reflects a pattern. Since charter schools began, entrepreneurs with little or no educational experience have seen an opportunity to make a fast buck. But parents need to exercise caution when deciding if they should enroll their children. In Sept. 2004, the California Charter Academy, the largest chain of publicly-financed but privately- run charter schools, slid into insolvency, leaving 6,000 students with no school to attend. Ken Larson had used $100 million in state financing to create an empire of 60 mostly storefront schools.

Parents have the right to send their children to any school they wish. But at the same time, they need protection in the form of better regulation of alternative schools. We learned what happened when Wall Street was allowed to operate under its own rules. Let's not repeat the experience with children, who are our most precious asset.

The Daily Koz: NY Times-"To a significant extent, the money for charter schools is coming from Wall Street, and in particular from hedge fund managers. Charters have attracted benefactors from many fields. But it is impossible to ignore that in
New York, hedge funds are at the movement’s epicenter. “These guys get it,”
said Eva S. Moskowitz, a former New York City Council member, whom Mr. Petry and Mr. Greenblatt hired in 2006 to run the Success Charter Network, for which they provide the financial muscle, including compensation for Ms. Moskowitz of
$371,000 her first year. “They aren’t afraid of competition or upsetting the system. They thrive on that.”

Hedge fund managers may be better known for eight-figure incomes with which they scoop up the choicest Manhattan penthouses and Greenwich, Conn., waterfront estates. But they also dominate the boards of many of the city’s charters schools and support organizations."-NY Times

These are the people who ruined our economy, but suddenly we're supposed to think it's a good idea to turn them loose on our schools? Or, moving away from Wall Street, consider the fact that one of the producers of the pro-charter movie Waiting for Superman is Philip Anschutz, owner of the Weekly Standard and funder of anti-gay campaigns and an intelligent design think tank. Again, are we to believe that
his political projects are innocent?