What do the tea parties want? Get ready to adjust your vision of America. 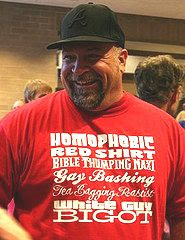 Here’s a coincidental grouping of articles that focused on a number of areas of tea party change:

Thinkprogress.org: The main philosophical principle of the conservative-led tea party movement is an “aversion to big government,” with tea party organizers turning their ire on comprehensive health reform, clean energy legislation, and even mandatory trash collection.

Now, a group of Missouri tea partiers have found a new target: regulations that would mandate more humane conditions in the state’s puppy mills … the Missouri Tea Party and the Tea Party Patriots against the proposition … described the measure as being about the “government or the big company trying to tell people what to do … Samuel Wurzelbacher (”Joe The Plumber“) has teamed up with the Alliance For Truth, an anti-Prop B organization strongly backed by the kennells and mills across the state, to blog against the measure.

MSNBC: (The) movement share the same views as the Christian right on social issues like abortion and the role of religion in public life, according to a poll … Nearly half of those who identify with the Tea Party believe that the Bible is the literal word of God, and a similar proportion thinks that public officials do not pay enough attention to religion … They are more likely than the population as a whole to view America as a Christian nation.