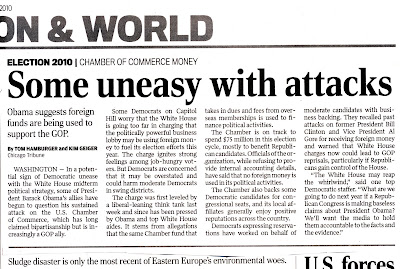 So far, the news media isn't coming close to taking this seriously, even though they found the subject of death panels riveting journalism. For Democrats, the bar is high, and evidence must be presented before the start of any investigation. For Republicans, fantasy and lying are subjects for an "honest" debate, because they whine the loudest.


The case is simple: The U.S. Chamber of Commerce does not have to disclose anything about the money they're spending or bringing in. Any red flags here? No questions? Why so much spending to defeat Democrats and not Republicans? Anybody there?

We owe the recurring controversy to the inadequacy of our campaign-finance disclosure laws, which don’t allow for random audits of political committees to make sure the foreign money is kept out or segregated for nonpolitical purposes. And the Supreme Court reignited this issue in its divisive Citizens United opinion last term by specifically leaving open the question whether the ban on foreign spending in U.S. elections violates the First Amendment. As Democrats broadcast their breathless allegations that Republicans and the Chamber of Commerce are taking “secret foreign money to influence” the midterm elections, the real problem is why the logic of Citizens United can’t justify a ban….

The court opened the money spigot with a kind of First Amendment absolutism: The five-justice conservative majority repeatedly stated that when it comes to political speech, the identity of the speaker does not matter, that more speech is always better, that the public cares only about the message, not the messenger, that even millions of dollars in “independent” spending cannot corrupt a candidate, and that the public won’t lose confidence in the electoral process because of these independent gobs of money.

Labels: US Chamber of Commerce
Email ThisBlogThis!Share to TwitterShare to FacebookShare to Pinterest