Conservative, Tea Party Candidate Likes to Dress in Nazi SS Uniform. What else is new. 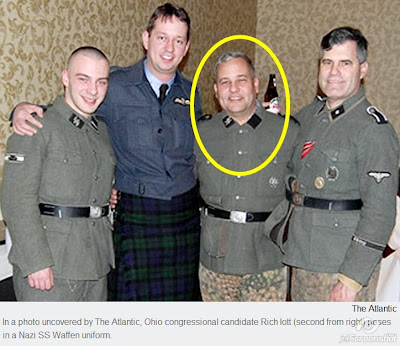 I'm am so tired of giving conservatives the benefit of the doubt. When does it become a pattern?

Daily News: That's the question hovering over GOP congressional candidate Rich Iott, after a photo of him posing in a Nazi uniform surfaced online this weekend.

Iott, a Tea Party favorite who is running for a seat in Ohio's ninth district, says he is not a Nazi sympathizer but a history buff who liked participating in historical re-enactments. He said he joined "as a father-son bonding thing" but quit in 2007 when his son was no longer interested.