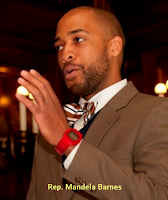 Oh, and somewhere in Becky's brain, this made sense; white nationalism = tonsillectomies?

You can't make this kind of stuff up: 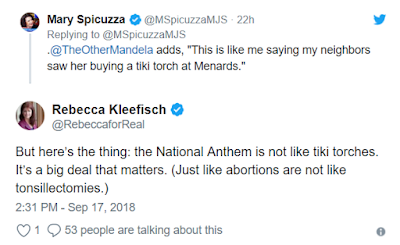 I should note that like all conservative policy, Kleefisch's claim is based on anecdotal, second-hand information that's often made up, or what conspiratorial Republicans like to call "facts."

Asked Monday if she had seen Barnes kneeling during the national anthem or had seen evidence of him kneeling, she answered, “What I mentioned was that people had told me this.” She did not say who those people were.


“It was at an event that we both attended at the opening of State Fair Park at the Wisconsin State Fair, during the playing of the national anthem. As I always do, I was looking at the flag with my hand over my heart.”

Barrett said he believes the allegations are "racially tinged." "Here in the state they've perfected the dog whistle," Barrett said. He added that the only difference is at the national level President Donald Trump instead uses a "circus whistle."

She backed off of her claim Tuesday, a day after she tried to stick by it. "I have to believe him and I have to apologize for something I was told," Kleefisch said on WTMJ-AM (620).