Lying Leah tells another one...

Sen. Leah Vukmir is a big liar. Liberal name calling? No, the truth. And she can't seem to stop apparently:

The 2011 protests against what would become Act 10 turned into a round-the-clock occupation of the Capitol, with demonstrators camping out in the rotunda. It was the largest series of protests at the Capitol since the Vietnam War, with crowds reaching an estimated 100,000 in early March, after the bill had been signed by newly-elected Gov. Scott Walker. Meanwhile, Ian’s Pizza shops delivered hundreds of free pizzas to the Capitol, with the cost picked up by contributions from all 50 states — as well as Bosnia, China, Egypt, France and 20 other countries.

But pizza deliveries in a riot zone?

The claim of "riots" in the Capitol was debunked in 2011 and rarely, if ever, has come up since. That is, until Vukmir put herself on the hot seat by recycling the claim. We still rate it Pants on Fire.

Or who can forget... 3 clips Here, together again, showing her major jaw-dropping flip-flop: 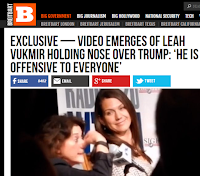 A new video has emerged of Wisconsin U.S. Senate candidate Leah Vukmir holding her nose when describing how she and others would feel voting for then-likely GOP presidential nominee now President Donald Trump and saying that Trump is “offensive to everyone.” Vukmir herself was also exposed as mocking Trump supporters ... as “Trumpkins.” And she appeared on Fox Business Channel with Stuart Varney on Tuesday, who pressed her on whether she supports the president. In the video appearance, she lied again:“


I have always been there with him, I have stood with him, I continue to stand with him,” Vukmir said, leaving out when she refused to endorse Trump after he became the likely nominee for president.