A Lesson for Trump losers - Projection; An unconscious self-defence mechanism characterised by a person unconsciously attributing their own issues onto someone or something else as a form of delusion and denial.

Just to give you an idea of how authoritarian Trump Republicans are now, this little exchange caught my eye on Vicki McKenna's Facebook page. I'm seeing the same kind of stuff from my Trumpian idol worshiper in Milwaukee as well. What could be wrong with uniformed adults pulling immigrant children out of school in front of classmates? 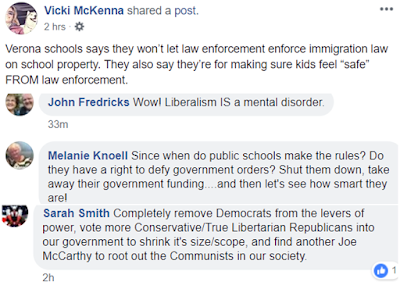 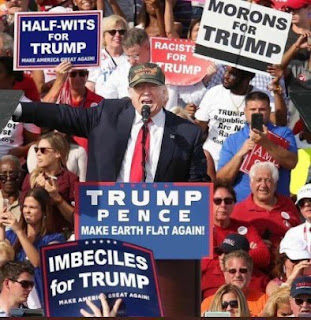 Trumpian Projection, the biggest its ever been: 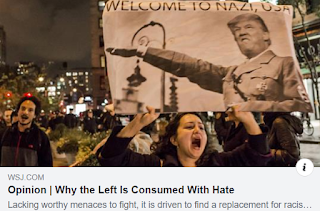 WSJ: Even before President Trump’s election, hatred had begun to emerge on the American left—counterintuitively, as an assertion of guilelessness and moral superiority ... a hateful anti-Americanism has become a self-congratulatory lifestyle. “America was never that great,” New York Gov. Andrew Cuomo recently said.

Of course, if "America was never that great," wouldn't you have to MAGA? This drives me nuts. You'll also notice the tone of this article is flat out ruthless while creating a myth around a non-existent hatred that can only be best described as, wait for it...criticism? Yup, can't have criticism hurting adoring Trump sycophants, pushing a white nationalist agenda:

It began in the 1960s, when America finally accepted that slavery and segregation were profound moral failings. Thus the labor of redeeming the nation from its immoral past would fall on the left ... led to the greatest array of government-sponsored social programs in history—at an expense of more than $22 trillion.

But for the left to wield this power, there had to be a great menace to fight against If racism was necessarily at the top of the list, it was quickly followed by a litany of bigotries ending in “ism” and “phobia.” The Achilles’ heel of the left has been its dependence on menace for power.

With white nationalism on the GOP's front burner, isn't it convenient to now pretend racism isn't really a problem? Can't criticize the dumbest, most unqualified narcist lunatic of a president...

Today the left looks to be slowly dying from lack of racial menace. It is driven to find a replacement for racism,  Failing this, only hatred is left. The left has used hate to transform President Trump into a symbol of the new racism, not a flawed president but a systemic evil. And he must be opposed as one opposes racism, with a scorched-earth absolutism. The voices that speak for the left have never been less convincing. It is hard for people to see the menace that drives millionaire football players to kneel before the flag. And then there is the failure of virtually every program the left has ever espoused—welfare, public housing, school busing, affirmative action, diversity programs, and so on.For the American left today, the indulgence in hate is a death rattle.

Yea sure, it's liberals: Who can forget this "happy" idea from the Newt Gingrich 90's:

This document, a working paper from GOPAC, Newt Gingrich's political action committee, was circulated to freshman Republican members of the 104th Congress in 1995. It functions as a rudimentary rhetorical handbook ... with a lexicon of terms that drive a wedge of distinctions between themselves and members of the opposing party.

Here's a list of "respectful" words to describe Democrats, that have nothing to do with hatred or division... 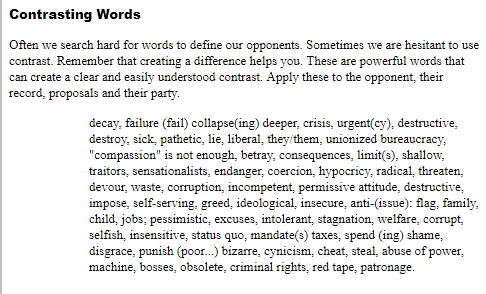