Walker’s Hiden Tax Hikes!!!: Gubernatorial candidate Tony Evers is right, Walker's Wisconsin really hasn’t cut taxes much, he’s just shifted it and passed those increases off to local governments by way of school referendums and wheel taxes. And the zero tax on agriculture and manufacturing lets industry off the hook to educate and train their own eventual workforce. When did that become alright? Who does that? Like Evers said, priorities are truly out of whack. WPR:

"Right now, Wisconsin priorities are out of whack," Evers said. Evers proposed a $1.4 billion budget for K-12 schools over the 2019-21 biennium. "Taxes have gone up under Scott Walker, all those millions of people who voted for school referenda — they did it because Scott Walker has decided not to fund their public schools." He also pointed out wheel taxes to cover road repair work in response to insufficient state allocations.

"It’s always about priorities — we found $4.5 billion for Foxconn suddenly out of thin air." Evers said he may consider "shifting" income taxes to do away with policies that benefit high earners, including the manufacturing and agriculture tax credit.

The Walker ... ad saying Evers may raise the gas tax by $1 a gallon to pay for road work. Evers rebuffed that statement. "It’s ridiculous — who the hell would, frankly," he said of a $1 per gallon gas tax increase.

Capitalism now Owns our Elections: And wouldn't you know it, all that concern about voter fraud and the integrity of our elections, fake!!! We’ve handed our basic right to vote to for-profit private businesses because we cut our taxes so much, that states can't fund or manage our elections and voting machines:

Hacks, Security Gaps And Oligarchs: Private companies play a crucial role in elections, from printing and designing ballots, to manufacturing voting machines, to hosting results websites. The industry exists because the local and state governments who run elections don't have the resources or expertise to maintain all aspects of an election themselves.


1. There's the state that discovered a Russian oligarch now finances the company that hosts its voting data.

2. Then there's the company that manufactures and services voter registration software in eight states that found itself hacked by Russian operatives leading up to the 2016 presidential election.

3. And then there's the largest voting machine company in the country, which initially denied and then admitted it had installed software on its systems considered by experts to be extremely vulnerable to hacking.

Paul Ryan Protects 2nd Amendment right to Kill Women: A bit harsh, I know, but true. What else could explain the shocking facts Ryan has decided to ignore. Nothing else: 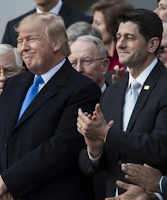 A short-term extension of the landmark Violence Against Women Act (was) slipped into a must-pass continuing resolution that kept the government funded until Dec. 7. A task force of Democrats and organizations dedicated to fighting domestic violence and sexual assault has been working on how to improve the existing law.

Speaker Paul Ryan won’t update the law to include a gun control that would save women’s lives, it's that simple:

But the poison pill for Republicans is the so-called "boyfriend loophole," to ensure dating partners under a protective order are prohibited from having a firearm. Currently, that law only applies to couples who are married, live together, or share a child. It also extends the firearm prohibition to people accused of stalking. Finally, it restricts people under temporary restraining orders from possessing a gun.

The task force offers staggering statistics to back up these requests: Nearly half of women killed by intimate partners are killed by dating partners, and 75 percent of women murdered by intimate partners and 85 percent of women who survived murder attempts were stalked first. A 10-city study cited by the task force found that 20 percent of homicide victims with temporary protective orders were murdered within two days of obtaining the order.