Trump and Scott Walker are riding on the coattails of the Obama economy. They shouldn't be if the press reported the facts. But instead, Walker statements go unchallenged:

1. Walker's biggest and most reckless promise was the creation of 250,000 jobs in his first 4 years. Even as a campaign promise, it was just a ridiculous goal, and many knew that. But the press ate it up and gave voters the impression it was possible. Wow. So, eight years later?

JS: Gov. Scott Walker presided over an increase of 213,000 private-sector jobs in Wisconsin, short of the 250,000 new jobs the Republican promised in his first four years. Wisconsin lagged the nation in the pace of job creation in the seven-year period, when the nation added private-sector jobs at a 15.2 percent rate. Wisconsin ranks 34th out of the 50 states in the percentage increase (9.4 percent)

The increase in private-sector jobs in Wisconsin in 2016 was 70 percent lower than the increase in 2015, and that the figure was based on data given to the WKOW TV by Walker’s administration. Democratic Sen. Kathleen Vinehout (Aug. 2017): "Under Scott Walker, Wisconsin is "still 16,000 manufacturing jobs lower than we were during the recession."

2. Walker Keeps Bragging about his Tax Cuts...that went to Property, Businesses, and Wealthy:

Walker has cut taxes by more than $8 billion, largely benefiting property owners, businesses and the wealthy.

But so many missed out on that "windfall..."

Unemployment is at its lowest levels on record, below 3 percent, though the steep decline in the unemployment rate since Walker took office aligns with a nationwide recovery from the Great Recession.

4. Walker brags about Lower ACA Insurance Rates Nationwide? Yup, Walker knows lower insurance increases are on their way this year, and not just because of his not so unique "reinsurance" program (which many other states are doing):

The price of a 2019 policy sold on the ACA exchanges will increase less than 4 percent according to an analysis of preliminary filings from insurers in all 50 states by ACASignups.net ... premiums overall are rising at about the same rates as medical inflation, a big change from the last few years.

Katherine Hempstead, a senior policy adviser at the Robert Wood Johnson Foundation (said) "After a very ... tortured birth and infancy, it sort of seems like the market is in some ways at a very stable place right now." She says insurance companies have figured out how to make a profit from the policies they sell on the ACA exchanges.

5. Walker is rescuing us from Trump Party efforts to sabotage and kill the ACA. Which means...PREMIUMS WOULD HAVE BEEN LOWER NEXT YEAR:

Premiums would actually be falling next year but for the actions of the Trump Administration and Republicans in Congress that have weakened the ACA law itself and its markets. Those actions include getting rid of the tax penalty for people who don't buy health insurance, refusing to reimburse insurance companies for discounts they are required by law to offer to low-income customer, and encouraging insurers to sell stripped-down, short-term insurance. Those moves are draining healthy young people out of the ACA market. Analyst Charles Gaba says, "The reality is that if you didn't have those factors, if you didn't have the expansion of a short term plans, and especially the repeal of the mandate penalty for next year, average premiums would most likely be dropping by a good four or five percent."

The Wellmark, which abandoned the ACA market in Iowa last year, is returning. 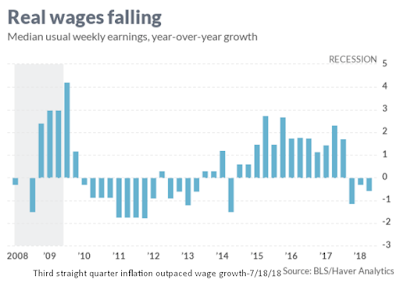 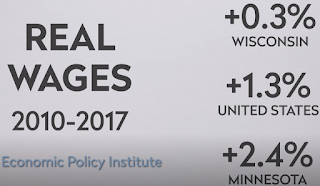 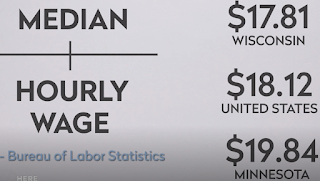 Walker's Wisconsin can't even keep pace with Minnesota. And all that money going to robotic leader Foxconn?


Alternet: And (Americans) see their tax dollars pouring into the rapid development of a robot economy that will leave them and their children out in the cold.

The Haves and the Have-Nots...

In the same year that workers took a pay cut, the CEOs of America's 350 largest corporations had an 18 percent jump in their pay, hauling in an average of $18.9 million each. In a lifetime of labor, the typical American worker would not be paid as much as those honchos took in one year. After all, workers can see in their daily job experiences that the Powers That Be -- corporate chieftains, economists, political leaders and others -- consider employees as a cost to be cut, not an asset to advance.