Capitalism should not be a guiding factor when it comes to healthcare or the development of life-saving drugs. But now even this is up for profit taking.

First, it's inhumane and immoral. Yet the following comments were uttered in defense of hiking drug prices for profit and saving jobs, at the expense of peoples pain and their lives:


“I think it is a moral requirement to make money when you can.”

“We have to make money when we can.”


There’s a general feeling in drug development that manufacturers are entitled to recoup the cost of developing a drug, widely held to be about 10 to 15 years of employee time and about $1 billion. Manufacturers’ inability to earn those sums back has been one justification for companies leaving the market.

Setting aside the fact that taxpayers and the National Institute of Health developed many of our most important drugs, let's focus on big pharma's exploitation of human suffering for profit and shareholder happiness: 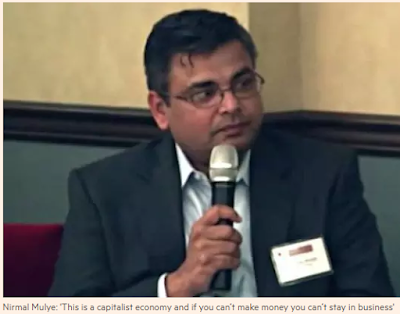 A HANDFUL OF years ago, a small pharmaceutical company quietly acquired the rights to an old 65-year-old generic antibiotic. New owner Nostrum Laboratories... abruptly raised the price more than 400 percent - $474.75 to $2,392. Nitrofurantoin ... is precious to the 6 to 8 million Americans who get urinary tract infections ... a liquid, used for children, elderly patients, and anyone who can’t swallow a pill.

Company CEO Nirman Mulye, telling the Financial Times, “We have to make money when we can. I think it is a moral requirement to make money when you can. My exact words to the guy was, 'Listen I don't have a moral obligation to breathe and eat, but if I don't do those things I'll die. It's common sense that if a business doesn't make profit or at least break even it's not going to be able to stay in business, right? American jobs will be lost."

Old Drugs Make a High Priced Comeback: Why develop new cures when the old ones rake in profits? This is sick stuff:

There’s a particular reason why Nostrum’s price hike has sparked such a reaction. Like Shkreli’s Turing Pharmaceuticals, the company is proposing to profit off a drug it didn’t invent.

Mr Mulye: “I agree with Martin Shkreli that when he raised the price of his drug he was within his rights because he had to reward his shareholders. If he’s the only one selling it then he can make as much money as he can. This is a capitalist economy and if you can’t make money you can’t stay in business. We have to make money when we can. The price of iPhones goes up, the price of cars goes up, hotel rooms are very expensive.”

Ezekiel Emanuel, an oncologist and vice-provost at the University of Pennsylvania, argued that case somewhat flippantly in The New York Times in 2015. “As a society we seem willing to pay $100,000 or more for cancer drugs that cure no one and at best add weeks or a few months to life. We are willing to pay tens of thousands of dollars for knee surgery that, at best, improves function but is not lifesaving,” he wrote. “So why won’t we pay $10,000 for a lifesaving antibiotic?”

The answers to that question have been: No, we shouldn’t raise antibiotic prices, because other drugs are overpriced already, or No, because poor countries who already struggle to buy enough antibiotics won’t be able to afford them at all.

Even a Trump administration official gagged on this one: