One Wisconsin Now has been a great advocate for highlighting the problem of student loan debt. Strangely, that's not where our backward Trump officials are taking us, and Trump tankers don't seem to give a damn either. Don't they must have college kids too?

"Education Secretary" Betsy DeVos pushes "Buyer Beware" Student Loan Policy: Like everything else under Trump Republicans, including healthcare, a return to a "buyer beware" economy just makes consumer spending a lot more dangerous and a big safety gamble. Hold onto your seats, this is going to be a wild ride into abject poverty. And private colleges love the idea, no surprise. Notice "relevant and reliable data" below. It's as reliable as "new and improved" on cereal boxes:


Students who are defrauded by their schools would have a harder time getting their federal loans erased under new rules proposed by the Trump administration … students would be eligible for loan relief if they can prove their schools knowingly misled them to take out loans or enroll at the school.

That would be a higher bar than rules finalized under Obama (for a simple) breach of contract (for promising employment).

DeVos' argued “Postsecondary students are adults who can be reasonably expected to make informed decisions if they have access to relevant and reliable data about program outcomes.” Schools deserve to defend themselves.
(It would) force students into arbitration agreements barring them from suing the school, (which was) banned under Obama's rules (where) students were granted full relief for their loans.

That Obama, helping keep postsecondary students from getting ripped off by education con artists like Trump and his "universities."

Here's yet another report showing just how bad the problem is right now, and could get under DeVos:


NY Times: The typical student borrower will take out $6,600 in a single year, averaging $22,000 in debt by graduation, according to the National Center for Education Statistics. Consider the official statistics:

1. The law requires that all colleges participating in the student loan program keep their share of borrowers who default below 30 percent for three consecutive years ... Among the group, just 93 of their colleges had high default rates after three years ... Two years later, after the Department of Education stopped tracking results, 636 schools had high default rates.

2. For-profit institutions have particularly awful results. Five years into repayment, 44 percent of borrowers at these schools faced some type of loan distress,

3. Loan performance should also be tracked for at least five years instead of three.

4. Too many borrowers and defaulters are low-income students, the very people who would receive only grant aid under a rational system for college financing. 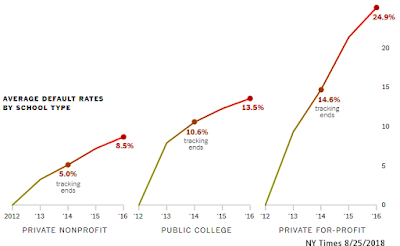 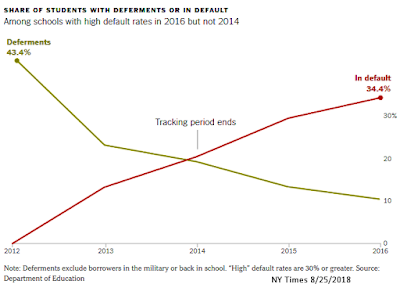 So we know we have a dramatic problem, yet Republicans continue to make fun of Democratic proposals to somehow provide a free college education to students. Next time they do that, ask them why they've never been outraged by Republican stronghold Indiana, blue NY., and the heavily subsidized Wyoming guarantee for state residents. Are they the biggest freeloaders ever, or just smart?

But tax cuts and freeloading, not sound budgeting, have delayed an important return to economic sanity that can only help future generations, not stick them with the bill:


Collectively, these borrowers owed over $23 billion, including more than $9 billion in default. Nationally, those are crisis-level results, and they reveal how colleges are benefiting from billions in financial aid while students are left with debt they cannot repay.

One more thing; wanna make the economy roar? Let students graduate without debt. Is that worth the investment?
Posted by John Peterson, Democurmudgeon at 9/02/2018 07:19:00 PM