Hunters, thank Walker for Spread of CWD! He's your guy...

The spread of CWD in Wisconsin is pretty much out of control, thanks to Scott Walker. He thought hunters didn't care too much about eating contaminated meat, but since reports came out that it is possible CWD could spread to humans, well, hunting has since declined a lot. Go figure.

While other states have taken action, Wisconsin has not, until now...but wait, maybe not?


JS: An emergency rule recently signed by Gov. Scott Walker to slow the spread of chronic wasting disease in Wisconsin may consider suspending all or part of the emergency CWD rule ... on the day it is scheduled to take effect. The emergency rule would have been the first substantive effort to curtail the disease in more than a decade. The rule was opposed by deer farming interests.

The fatal deer disease has been spreading across Wisconsin relatively unchecked for the last 16 years. The Legislature has failed to enact measures to reduce the prevalence or distribution of CWD in the state.

Instead of using science and common sense to control CWD, Sen. Steve Nass wants a few unelected whiny hunters to run the DNR: 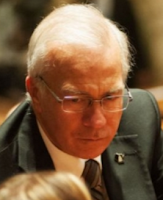 Sen. Steve Nass (R-Whitewater) said he ... can block or alter a rule with a simple vote. "This emergency rule contains substantial and burdensome changes to the way Wisconsin hunters will deal with deer carcasses with little advance notice or education," Nass wrote.

More and more hunters have been contacting their legislators and speaking against provisions in the rule, said Mike Mikalsen, chief of staff for Nass.

Many of the solutions in the approved emergency rules have been debated and researched for nearly a decade, so Nass is lying about "little advance notice or education." These are long overdue actions:


1. The measure has two prongs, one to enhance fencing at deer farms to reduce the risk of contact between captive and wild deer ... Deer farmers would have one year, or a time agreed to with the DNR, to perform any required fencing changes.

2. The other to reduce the distribution of infected carcasses by hunters, the rule would require deer killed in a CWD-affected county to be quartered or boned out before being removed from the county. There are two important exceptions: A whole carcass could be moved out of a CWD-affected county if it is taken to a taxidermist or a licensed meat processor anywhere in the state.

When will Republicans ever be blamed for destroying recreational hunting and outdoor sports in the state?

George Meyer, executive director of the Wisconsin Wildlife Federation, said "We know there are going to be challenges for sportsmen and women. But this is about protecting Wisconsin's deer herd."

As of early September, Wisconsin had 55 CWD-affected counties.