The Truth about the Trump Economy, and Women Trump Voters think he knows what he's doing.

Republican and Democratic voters bought into the idea that Trump the million-billionaire must know what he's doing economically as president. Even weirder, these independent "we don't need government" loudmouths are expecting Trump to help them out with big government handouts, like those deficit-increasing tax cuts they can now spend on higher priced goods thanks to sky-high tariffs. It's crazy, right?

Borrowing more Money for Tax Cuts? Yes: From NPR's Marketplace, this eye-opener about our rising trade deficits, borrowing from other countries to pay for tax cuts...Trumps smoke and mirrors. NPR Audio:

Wage Stagnation...again: Sure wages are going up, but only for certain industries and in states raising their minimum wage, but manufacturing is taking a hit. Business just isn't competing with wages. NPR Audio:

Trump Voters Think He's an Economic Genius (below): The guest group of women Trump voters on CNN below basically thought Trump was real change, and a billionaire that felt their pain (really?). Everything else in the media about Trump is just noise (how much he lies, women, Russia, uncertainty, the environment). He's made the economy roar, and nothing else matters. Warning: This clip will make you sick:

He's a genius if you like massive debt and absolutely no investment in our country. I posted this story a few days ago: 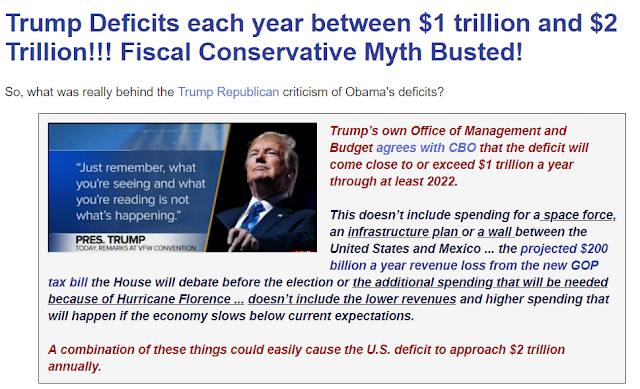