The following Scott Walker tweetstorm plays to his party's fears and to Walker's biggest strengths; divide and conquer, resentment, racism, and utter contempt of the 1st Amendment.

Another of Scott Walker's positive messages?

So trying to take down challenger Tony Evers a few percentage points by playing up his running mate and candidate for Lt. Governor Mandela Barnes as a symbol of Black Lives Matter is so white nationalist of him. But if it worked for Trump, why wouldn't it work for our sleepy-eyed sociopathic governor.

Scott Walker's got nothing but this now? 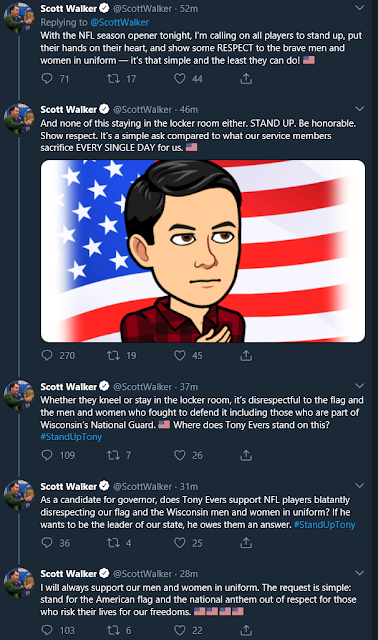 Yea, killing unarmed black Americans is all just so much drummed up fake outrage. Surprisingly, no ones told Walker that kneeling never had anything to do with the military?

Military Vets aren't buying this either:

As for unshakable Democratic candidate for Governor Tony Evers??

This was Barnes original response:

Walker and Kleefisch can take it up with Green Bay quarterback Aaron Rodgers, or are they going to just boycott Packers games?

After glancing at his twitter feed over the last couple of months, it also surreal how all he's ever bragged about is the nationally produced low unemployment numbers in our state he's taking credit for and Foxconn's chameleon-like contract. What a record, what a history.
Posted by John Peterson, Democurmudgeon at 9/06/2018 01:14:00 PM