But what about our highways? As Wisconsin roads crumble under Scott Walker's weird vision of our transportation future, voters finally got a clear picture of how bad things will be getting:

"There are some groups out there that want to spend billions and billions and billions of dollars on more, bigger, wider interchanges across the state. I actually think we should be fixing and maintaining our infrastructure. I don’t know that we need bigger and better and broader right now when we have a changing transportation system."

I've never been on board with "liberal" groups that would love to take us back to deadly two-lane highways. With the proliferation of electric and hybrid cars, old arguments about cars trashing the environment are disappearing, albeit slowly, thanks to Wisconsin's love affair with trucks. But there are hybrid SUV trucks like the Toyota Highlander, so what's the problem here?


Walker has been "increasingly inaccurate" when describing the state's highway system, said Mark Gottlieb, Walker's former transportation secretary. Gottlieb is the third former top aide to Walker to speak out against the governor in recent months. The GOP governor isn't telling the truth about road projects and is taking a high-risk gamble that could see the state invest billions of dollars in obsolete highways.

Gottlieb reacted strongly to Walker's suggestion last week that the state could save money by declining to add lanes when it rebuilds roads ...

Walker's sounding every bit as irrational as Trump about transportation, and these guys are the ones in control? 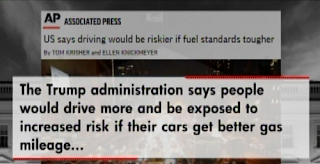 The governor contended people may drive less in the future, but Gottlieb noted traffic has been increasing since the country climbed out of the 2008 recession. "Most highways being actively considered for expansion in Wisconsin are already unacceptably congested today, causing delay, economic loss and higher crash rates," Gottlieb said in his statement. "How much risk are we willing to accept to see if the governor’s predictions hold true? If they don’t, we will have spent billions of dollars to duplicate 1960-era designs that will be obsolete the day they are built." Gottlieb said he was speaking out because Walker hadn't been honest about transportation.

Will voters buy into Walker's reasons for not funding roads? I'm not seeing a Gov. Doyle connection in the comment below, are you...

Really? So shifting money during the GOP's free-market gift to the world, The Great Recession, to schools was a bad thing? Fund roads not schools?

Gottlieb, a former Civil Engineer, should know: Walker also lost federal funding, more of our own tax dollars coming back to the state because he couldn't show how the state would "fund the work:"


Gottlieb said Walker's claims wrongly implied that decisions about expanding highways were made by outside groups ... state and federal laws require extended review and officials take into account public input. Gottlieb cited the study for rebuilding I-94 between the Marquette and Zoo interchanges in Milwaukee ... runs nearly 1,000 pages and cost more than $20 million to produce. "The governor’s seemingly offhand comment that the decision to widen our highways is driven by outside interests is not factually based, and is profoundly disrespectful to the professionals in the private and public sector who are trained to design and build safe and efficient highways for all to use," said Gottlieb, a retired civil engineer.

Walker initially backed the project, but shelved it last year after federal officials said they were prepared to withdraw their authorization for the project because the state couldn't show it had a way to fund the work.