Trump's hired following is once again making the rounds because, well, it happened a few times before and he got caught and fined. More on that below.


Who could not love this guy? Plaid Man was born...

But his heroism was short lived, when he was asked to leave for a more enthusiastic hired stand-in, along with a few others...see for yourself (no audio):

Apparently, like everything else around Trump, the crowd are partly "fake," including those hired to play a drooling dupe: 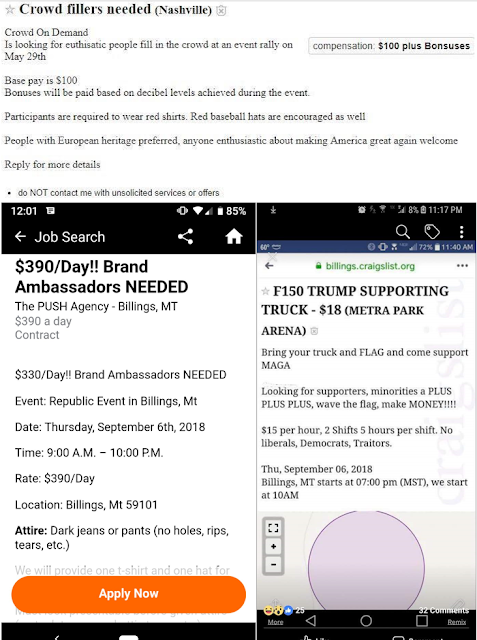 It's all happened before...


CNN-January 3, 2018: Next time you're watching a campaign rally for a politician, or a glitzy premiere, take a close look at the enthusiastic faces waving banners at the front. There is a good chance that some are paid performers. If they are, it is likely that one Adam Swart put them there. Los Angeles-based entrepreneur Swart has pioneered the 'supporter-for-hire' business. His start-up Crowds on Demand launched in 2012.

CheatSheet-March 4, 2018: Donald Trump was accused of breaking the law during his campaign by hiring paid actors to attend his rallies. Although the Federal Election Commission dismissed the charges, a lot of U.S. citizens haven’t. What’s worse is that he paid them a measly $50 apiece to come out and cheer, according to Business Insider. Corey Lewandowski, Trump’s campaign manager at the time, denied the charges The commission closed the case, saying that the Trump campaign admitted it paid $12,000 to Gotham Government Relations on October 8.