You're not Victims, you're White Nationalists!

The Republican Party's victim act is not just getting old, but needs to stop, now.

Being an adult, and applying just a little common sense tells us this has gone too far. Oh, and the use of these two magic words, "left wing," doesn't suddenly make racism disappear:

And don't you love the switcheroo where Republicans, who terrify white voters with threats of illegal immigration, Black Lives Matter, and the Muslim faith, falsely blame Democrats for using that very tactic. It's the old second-grade retort "I know you are but what am I?"


"It’s designed to make Trump radioactive, sandbag his agenda, and terrify black voters so they’ll stampede the polls and save the Democrats’ bacon in November 2018. The Left deserves universal scorn for deploying such political plutonium," said Murdock.


Political plutonium? The ploy here is to use "bright and shiny" words that are so over the top, that at least a little of that must be true, right? But just a little common sense cuts through the fear-mongering: 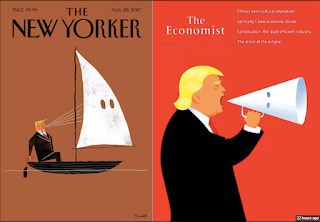 Heidi Beirich, director of the Intelligence Project at Southern Poverty Law Center. "The rise in hate groups started in 2000, and that’s the year when the census said white people will become a minority in 2040s. Trump played into racist instincts. They (white supremacist groups) view Trump as a good political force for their beliefs."
Alix Olson, a retired Madison Police Department detective who founded the organization Seeking Tolerance and Justice Over Hate, said Trump’s election has emboldened hate groups "who felt before that they didn't have a voice. This administration has given carte blanche to white supremacy. Everything is starting to become undone to the detriment of people who have way less power than white people do."

The abandonment of common sense has gotten so bad that even this clueless former president couldn't hold back from saying the obvious:

Former president George W. Bush to call on the public to reject white supremacy and racism. "Bigotry or white supremacy in any form is blasphemy against the American creed. Bullying and prejudice in our public life sets a national tone, provides permission for cruelty and bigotry, and compromises the moral education of children."