I want to let you think about the following proposed HIKE in TAXES on hybrid and electric vehicles, that Republicans are considering in their tax reform plan for the state. Let it sink in...

I know, I spent hours rereading this penalty on thrifty environmentally concerned drivers, thinking there was a typo....a word left out that could change the meaning somehow...

Only state hybrid and electric car owners will be punished and made to fix the roads so many interstate drivers end up destroying.

Walker, the Back to the Future Governor: In the not too distant future, a majority of vehicles will be hybrid and EV only cars. This means the U.S. will soon fall dramatically behind market-driven auto technology. Hey, aren't we now the technology state with Foxconn?

The Netherlands and Norway have already set targets to ban fossil-fuel cars by 2025, with sales after that deadline limited to electric and plug-in hybrid vehicles. France also said on July 6 that it would ban sales of petrol and diesel vehicles by 2040 to reduce air pollution and become a carbon-neutral country by 2050. Britain made a similar announcement two weeks later.

Yet in Wisconsin, Scott Walker is betting on gas power trucks and cars. And he wants to be reelected? 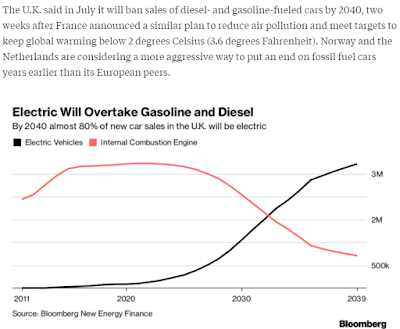