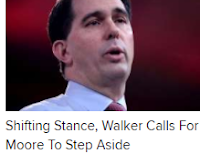 Here's what Scott Walker said on Upfront with Mike Gousha, after hearing John McCain and Mitt Romney said Roy Moore should step aside. A real tough question for Walker:


Walker: "If it's true. That's a great qualifier...Maybe they've looked at the details, where I'm more focused on Wisconsin than I am on the U.S. Senate, certainly Alabama, I heard a little about the news, but I don't know the details to know."