Republicans have gone from a political party, to a social media club for Sociopaths!!

Paul Ryan's well-rehearsed "thoughtful-concerned" policy positions hit a performance sour note the other day, revealing just who this cruel brutal huckster really is. It was one of the phoniest, and most shameless interviews I've ever seen.

Ryan was out of his element and it showed, feigning concern for the families and victims of the latest mass shooting, and oddly saying that non-religious Americans, the "far secular left," will never be able to understand...that "prayer works." But that's a lot of people he just turned into enemies:


If the U.S. contained just 100 adults, 25 would be people who identify with evangelical Protestant denominations, 23 would be religiously unaffiliated and 21 would be Catholic.

Delusional "Prayer Works:" Either Ryan must think prayer is reducing the number of mass shootings, or prayer is making it easier for families to just write off their losses? What you'll get from the "far secular left" are actual solutions to try and stop as many killings and mass shooting as possible.

Cafeteria Catholic Paul Ryan took a shot at anyone who might be secular, who he thinks is "the far left," all the while blaming Democrats for dividing the country? And those "laws on the books" that prevent people getting guns? I thought laws didn't prevent people from getting guns?

Laura Ingraham repeated what may on the "far right" are saying:


Ingraham: "It turns out the man, who is the hero in this was an NRA member and knew how to use a weapon, and saved the lives of many others."

The best answer to this pathetic chest pounding slogan from the NRA?

Ryan's inaction of the bump stock controversy? Well, that's been delegated away...forever basically. Instead, they're back in business:

Bump stock's currently are legal. And Jordan Stein with Gun Owners of America defends the company's decision to resume sales. JORDAN STEIN: They're a company. And they should be free to operate their business as they want. We're opposed to any type of legislation or regulation. If we can regulate bump stocks, then it will open up doors to other measures of gun control.

Don't be surprised someday if you see programs like the parody below becoming a reality.
Some people on Facebook thought this was real...well, no...but that should say something about the bad place we're in when it comes to Gun Crazy: 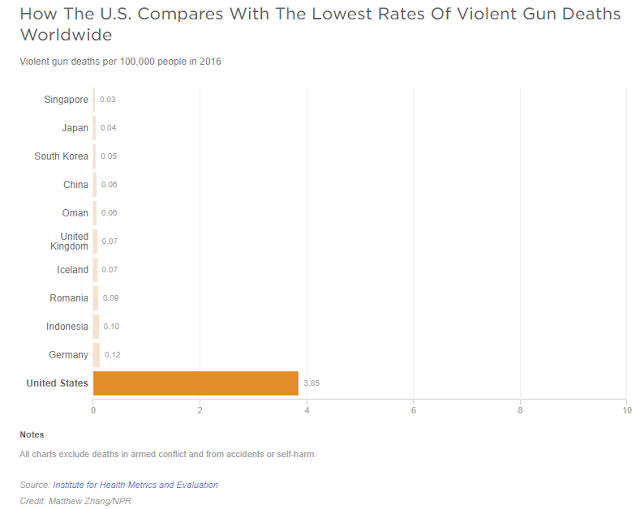