CWD Deer Hunting Season off to a Great Start...eat up.

Hunter beware, buyer beware...hell, beware of life in general because public safety is no longer the intrusive governments responsibility. Man-up!

Deer hunting season is here, as hunters march out into our endangered wilderness with CWD infected deer. Don't worry, we don't think human ingestion of CWD infected venison will kill you.

Hunter Beware: What you don't know will Kill You: In the "bad is good" Bizarro World of Republican politics, who cares about the spread of brain killing prions: 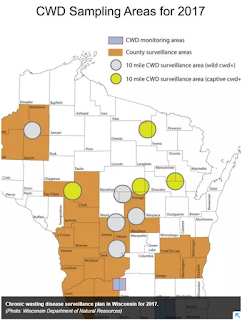 
Seriously, Republicans are counting on their surreal efforts to popularize hunting by distracting hunters away from the dangers of feeding CWD infected venison to their entire family. Anyone aware of the warnings...nope. If they really wanted to bring deer hunting back, get rid of CWD? Doh! Now even kids can hunt sick deer:


The disease is a transmissible spongiform encephalopathy, a family that includes scrapie as well as mad cow disease and Creutzfeldt-Jakob (both of which are fatal to humans) … health experts, including at the U.S. Centers for Disease Control, have long issued strong advice against eating venison from CWD-positive animals. "Venison from deer harvested inside the CWD Management Zone should not be consumed or distributed to others until CWD test results on the sources deer are known to be negative."

Scott Walker again, Missing in Action: Like the prisons and veterans home debacle, Walker won't participate in, or allow a photo op, tying him to the real festering problems eating away at our state that only government can improve.

Worse yet, the state agency with authority over captive cervid facilities - the Department of Agriculture, Trade and Consumer Protection - isn't doing anything to snuff it out ... it appears the DNR has lost its will to combat CWD. And the state's agriculture and consumer protection agency has clearly sided with the business interests in the deer farming industry.

"I've been dreading this day," said Todd Schill, 55, of Waupaca who has deer hunted in the county for 40 years. "I didn't buy hunting land here to be next to CWD."

Jan. 4th, 2017: Notably, hunter participation also was down. The agency sold 598,867 gun licenses, a 40-year low and the first time the number has dipped below 600,000 since 1976. Hunters registered 196,785 deer during the 2016 Wisconsin gun deer season, the lowest total in 34 years. A longer term solution may involve looking beyond user fees ... (fees have the) potential to harm state efforts aimed at reversing a decline in hunting ... The DNR outlined other alternatives that include cuts to wildlife and fish-stocking programs and new efforts to attract more people to hunting and fishing.

Voluntary testing is available...voluntary, what could go wrong there? 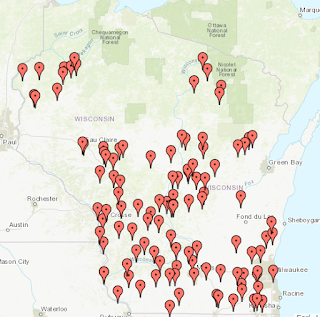 Guys with Guns, what could go Wrong? While Republicans remove any kind of firearm training, responsible gun owners are rising to the challenge, it's just going to take going through a few growing pains first.


Three hunters shot and wounded themselves Saturday. A 49-year-old man shot himself in the right ankle. A 51-year-old man in Shawano County shot himself in the leg when he bent over and his holstered handgun fired. And in Forest County, a 49-year-old Crandon man was sitting in the cab of his truck when he saw a deer around 9 a.m. When he attempted to move his rifle, it went off, sending a bullet through his legs and the truck’s seat and door.