As much as I hate Republicans, and the Democratic Party's lack of fight and framing, I'm encouraged by the idea that there are actual "undecided's" in the state. I thought they were as real as unicorns...but there they are, in the "driftless" (untouched by glaciers) region of southwest Wisconsin. Great reporting by Milwaukee Journal Sentinel's Craig Gilbert:


The Driftless Area that extends into Iowa, Minnesota, and Illinois — contains the largest cluster of blue and purple counties in rural, white America. It boasts the nation's greatest concentration of Obama-Trump counties -- places that voted for Obama in 2012 and Trump in 2016.

Southwest Wisconsin defies one other stereotype about our polarized politics — that America is increasingly composed of separate red and blue communities. In a very partisan age, the region is dominated by neither party. Like its serpentine roads and rivers, its voters wind this way and that. Last fall, five of the seven southwestern counties voted for Republican Trump for president and Democrat Russ Feingold for the U.S. Senate. Six of the seven voted for Obama twice before swinging to Trump. Weak party loyalties help explain a history of big election swings.

On a recent morning at Dan Anderson’s saw shop, five guys sporting beards and boots joked about how many guns and chainsaws they owned. None of them voted for Trump.

A Dutch news crew showed up at Jo’s Kountry Bar in Steuben (pop. 131), a Crawford County village that voted for Barack Obama by a margin of 35 points and then for Trump by 38 — the biggest swing in percentage terms in Wisconsin.

Here are a few other highlights. Check out the whole story though, it's a fun read:

Richland Center – It was just over a year ago that this rural battleground region swung hard for Donald Trump in a clamor for political change ... But today that frustration with politics appears undiminished by his election and is aimed in all directions — including Trump’s.

“I am a political science major. I am starting to hate politics — actually, not starting. I do hate politics: the vitriol and the vulgarity and the lack of willingness to talk to people,” said Kari Walker, co-owner with her husband of the Touchdown Tavern in Reedsburg.

And they complain they are utterly dismissed or demonized by liberals and Democrats for the choice they made. It's, "How can you possibly think that way?" said Ken Ogi, who was at the lutefisk supper. “Why can’t we have civilized conversations and not be hollered down?”

“I look at (Trump) as possibly being the savior of democracy for the United States,” said Dick Bartels, a Marine veteran who was guiding cars into the parking lot outside the lutefisk supper.

In more"than 30 interviews over five days here, most voters and political observers – including many Trump supporters – said they viewed what happened last fall as more of a vote against Clinton than for Trump.

Some, like Obama-Trump voter Nell Justiliano of Spring Green, now have meager expectations of his presidency. “I did vote for him. It was really hard … (but) “I’m so embarrassed by what a (expletive) show it is. Because it is a (expletive) show,” she said, citing the turnover in the administration, deriding Trump’s diplomatic and leadership skills, and bemoaning his behavior. “You want change, then you just get really discouraged when it doesn’t happen,” she said.

While there was no great clamor for tax cuts in interviews with voters here, there was a generalized but plaintive cry for less noise and more action. 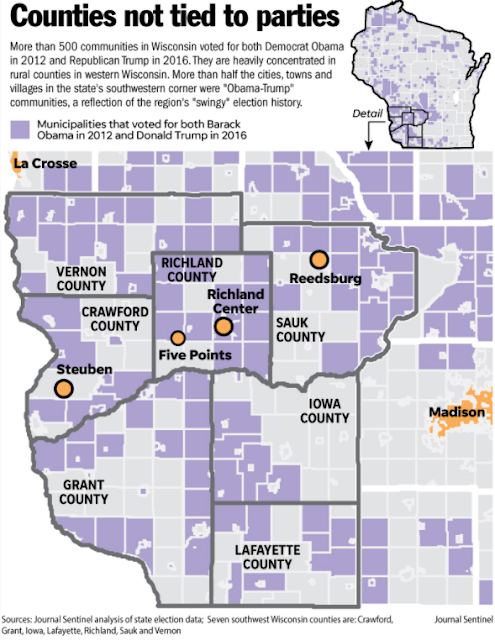