Americans would keep ACA Mandate if people had to pay more or started losing their Insurance!!!

Repealing the ACA mandate is the silver bullet Republicans knew would destroy ObamaCare. So what if 13 million people will lose their insurance, the voting public isn't paying Republicans enough to look out for them, they're serving the corporate power donors:


After the Senate bill was released on Tuesday, the majority leader, Mitch McConnell, explained its inclusion: Repeal would raise revenue, help offset the effects of tax reductions elsewhere in the bill and make it easier for Republicans to make a lower corporate tax permanent. It helped, he added, that it was unpopular and that every Republican senator supported repeal.


...a benevolent technocratic necessity, born of economic models and real-world experience. When the outcome is so obviously positive, concerns about government power are irrelevant. But to many of Obamacare’s critics, those concerns are of the highest importance. In this view, the mandate is a form of unacceptable government overreach, a violation of the individual right to avoid engaging in commerce. 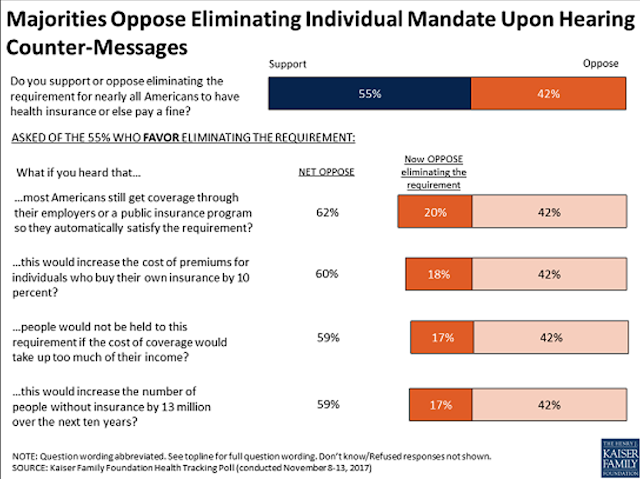 The Kaiser Family Foundation released a new poll Wednesday finding that 55 percent of Americans support the idea of repealing the individual mandate. That number rises to 73 percent when you look at the respondents who identify as Republican.

The Kaiser poll shows what happens when people are asked whether individuals support repealing the individual mandate. They then followed up with a second question, about whether their opinion would change if they heard that it would increase the number of people without health insurance by 13 million over the next year. Support for mandate repeal dropped by 17 percentage points after hearing that fact.

The Boston Globe had this incredibly interesting article on solving domestic violence, the possible predictor of mass shootings:


No demands for sweeping policy changes are emanating from Trump or other Republicans after the mass shooting in Texas because the gunman was not Muslim. I was almost going to write that we'll see what action Congress takes today in response to the murders -- silly me. Once the right wing, with its pusillanimous fealty to the deep-pocketed NRA, refused to do anything about little kids being slaughtered in their classrooms five years ago, it became clear that they'll never do anything, ever, no matter how many people are murdered with guns. BTW, it's 13,150 so far this year. That's about 43 people a day. We are so much better at killing Americans than our enemies are. ISIS has nothing on us!

I'm also tired of hearing residents of the latest victimized community say that they never imagined such a thing could happen in their town. Are you kidding? We live in the United States! There are more guns in this country than there are people. We're 25 times more likely to be killed by a gun than the residents of any other developed country in the world. To think that there is a single safe space anywhere in the US is beyond naive.

Also not surprising: The gunman had a history of domestic violence,which is a "screaming red flag" for future mass shootings. Many mass shooters practice on their wife and kids first: The Fort Lauderdale airport shooter, the Pulse nightclub shooter, the Planned Parenthood shooter, the Lafayette movie theater shooter, the California McDonald's shooter, and on and on. Adam Lanza shot his mother before he killed the little kids at Sandy Hook. The Virginia Tech shooter had harassed women on campus. The cafeteria shooter in Killeen, Texas, stalked women, and during his shooting spree, passed by men in order to target women. Stephen Paddock verbally abused his girlfriend in public in Las Vegas -- and who knows what he did behind closed doors. The Texas church shooter was kicked out of the Air Force and served a year in the brig for assaulting his wife and child, yet he was able to buy a Ruger AR-556 assault rifle at a San Antonio gun store last year. (Latest news: His in-laws attended the church he shot up, although they were not there yesterday. Hardly a coincidence.)

What's NOT a predictor of mass shootings? A history of mental illness.People who are mentally disturbed are far more likely to harm themselves than others. But that's the canard Trump resurrected in Japan -- without knowing anything about the Texas shooter. Prime Minister Shinzo Abe should school Trump in how to virtually eradicate gun violence; Japan has had just one gun death so far this year. One.Like every other developed country, it's a very, very simple solution: The fewer guns, the fewer gun deaths. (Massachusetts, with very tough gun laws, has the lowest rate of gun deaths in the US.)

By the way, Texas Governor Greg Abbott was embarrassed two years ago by the massive number of guns being purchased in his state. Embarrassed, that is, because Texas was No. 2 behind California. "Let's pick up the pace Texans," he tweeted.