It's the Republican ideology that oddly controls the parties miserable and whiny "left behind" constituents, as they happily vote against their own self-interest. But for the millionaire and billionaire donor class, that ideology serves their best interests...and bottom lines of course.

It's the party that doesn't even blink at the prospect of electing child predator judge Roy Moore to the U.S. Senate. Republican voters won't have a problem voting for Trumpian drone Kevin Nicholson either since he's getting big money from the same millionaire/billionaire donors stuffing Moore's campaign coffers.  Kevin is hanging with the alt-right crowd: 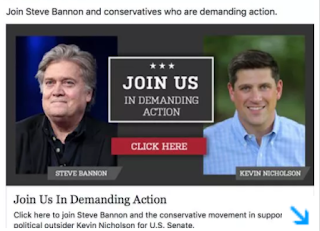 Moore and Nicholson are Richard and Liz Uihlein's kind of candidates, founders of the Uline Corp. Kevin Nicholson may have asked Moore to step aside, but he knows that ain't going to happen.

The whiny Uihlein's know this, and put their faith, ideology, and money on these extremist peas in a pod.


Moore co-authored a 2011 study course in which a speaker contended women should not be allowed to run for public office and, if they did, people have a moral obligation not to vote for them.

The study set was a product of Vision Forum, a Texas-based evangelical group led by Doug Phillips ... in a series of courses designed to teach public policy and ethics to its attendees. Vision Forum closed in 2013 after Phillips resignation following his admission of an extra-marital relationship. The woman in the relationship, Lourdes Torres-Manteufel, later sued Phillips and Vision Forum in connection to a relationship that she said began when she was 15.

The Whiny Uihlein's not Happy with Being Rich: The Uline Corporation has been waiting for years to see Amazon's Jeff Bazos tank the company. They say Amazon can't survive since they don't make a profit. That's not true though, since 2015:


Amazon.com Inc. was known for years as the company with huge revenue growth that would spend too much to be profitable. That reputation can now be forever put to rest. The e-commerce giant reported its fourth consecutive quarter of profitability...nearly $1.2 billion in that time period.

Whine, whine, whine: You'd think with their money and success in the packaging supplies business, the Uihlein's would have taken the high road. Nope. Uline President Liz Uihlein made "fear Amazon" the company statement on their website, believe it or not: 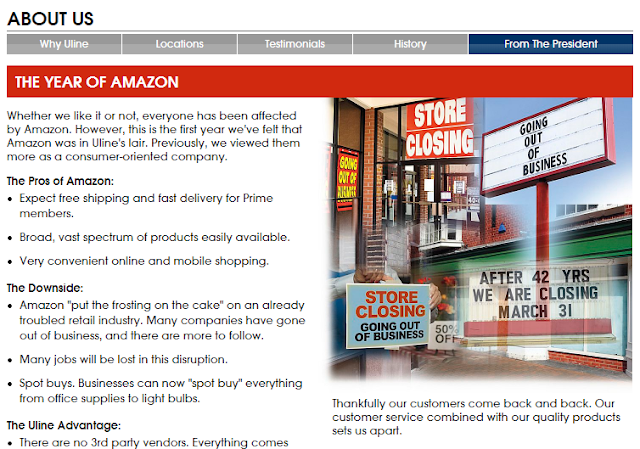 Influence Peddlers of the Year:

Since the 2009-10 election cycle, the Uihleins have contributed more than $26 million to Republican and conservative federal candidates, political party committees, political action committees (PACs) and an outside electioneering groupthe Ed Uihlein Family Foundation, which contributed nearly $35 million between 2007 and 2014 to civic, religious, and conservative groups, including the Heritage Foundation, Americans for Prosperity Foundation, Federalist Society, and the Illinois Policy Institute.