True ideological believers in supply-side, voodoo economics, know deep down that if their idea continues to fail as it did in Kansas recently, at least they can make the argument that there now isn't enough money to fund our safety net programs like Social Security, Medicare, and Medicaid. It's still a win.

But the proof of the failed Kansas Comeback, orchestrated by Gov. Sam Brownback, leaves no doubt supply-side will be a Trump disaster...to paraphrase, 'a bigger disaster than we've ever seen:' 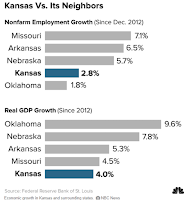 Brownback pitched his plan as a test of conservative policy ... Kansas has become Exhibit A in the prosecution of the Trump tax cuts. It's routinely cited as evidence the new GOP proposal won’t grow the economy or pay for itself, and that proposed business tax reduction similar to Brownback’s will create a new loophole for wealthy individuals to exploit.

Much more than Brownback ever did, Trump's team is promising that explosive growth will make up for the cost of their cuts. "The tax plan was basically an experiment in supply-side economics," said Heidi Holliday, executive director at Kansas Center for Economic Growth.

Over the next five years, state and local governments battled over a dwindling revenue supply ...Job growth, meanwhile, lagged behind the national average and neighboring states. "The empirical evidence was clear that revenues fell off a cliff, especially individual income tax revenues," Kenneth Kriz, who has studied the plan's impact as director of the Kansas Public Finance Center at Wichita State University.

Okay, so if you take one thing away from this...

While Trump administration officials are making spectacular claims about how their tax cuts will produce more revenue once the economy takes off, mainstream economists overwhelmingly say they will add significantly to the debt.

Next Up? Not enough Money For Medicare, Medicaid and Social Securityllll:

WHA: The plan is expected to increase the deficit over ten years. For Jon Peacock, director of the Wisconsin Budget Project, this deficit increase is a risk for residents in the long run.


"Once they pass this tax plan, and increase the federal deficit by $1.5 trillion, then they’re going to say they have no choice but to follow through with cuts in popular programs," he said.

Georgia Republican Rep. Buddy Carter explained on NPR how "faith" in supply-side economics can give you the greatest false sense of security ever. NOTE: Carter exemplifies the GOP envy side of politics, by wanting to bring those evil liberal high tax states down to the level of those cheap southern states, as a way of leveling the playing field. Carter has it upside-down since high tax states end up subsidizing low tax states, by not getting near the federal dollars back for every dollar they send in.

Which States Are Givers and Which Are Takers?

The Atlantic: It’s not just that some states are getting way more in return for their federal tax dollars, but the disproportionate amount of federal aid that some states receive allows them to keep their own taxes artificially low. That's the argument WalletHub analysts make.

If you want to see how you'll do with the GOP tax cuts in general, not including the cuts that will phase out leaving the lower and middle class paying higher taxes later on, check this out:


Business Insider: Here's how you can figure out how much you will save on your taxes: Start by finding your 2016 tax return. Look at line 37 on page one, that's your adjusted gross income from last year. Don't worry about what that is exactly, just know you need that number.

Then, take a look at the second page. Lines 40 and 42 are your deductions and exemptions from 2016. What the Republicans are proposing is collapsing those into one big standard deduction: $12,000 if you're single, $24,000 if you're married filing jointly. You can compare what you paid last year to those numbers to see which one is better for you.

Next, take your adjusted gross income, that's line 37 from page one, and subtract out either the $12,000 standard deduction or the $24,000, depending on if you're single or married, to come up with your taxable income under Trump's proposed plan.

Compare that number to line 43 on your 2016 tax return. That's the amount you paid taxes on last year. The lower this number is, the less you pay in taxes.

Once you know your estimated taxable income using Trump's new plan, you can actually run the numbers using the tax brackets they've laid out. Simple as that! Then you can compare how much you would pay in taxes under Trump's plan to what you paid in 2016 and that's how much you could end up saving or paying more in 2018.