Republicans are plundering the lower and middle class tax breaks and seniors to pay for corporate tax rates. Why? Because...and I know this sounds cliched, they're doing it for their billionaire donors, who've threatened to cut off campaign donations if they fail to follow orders. Meaning this has nothing to do with simplification or tax relief, and more about pure political power. Yea, this is fascism.

Oh, and about "keeping more of your hard-earned money?" Take it away Scott Walker (literally):

Nope!!! The point is, if you were one of the lucky ones to get a tax cut, you'll be spending your savings on increased fees, insurance premiums and educational costs from the rising price of every plundered program.

And just like the reconciled Bush tax cuts, the lower and middle class tax cuts will expire too. Republicans are banking on Democrats renewing these expiring cuts, even if plunging revenues make that almost impossible. It's a trap, while all the corporate tax rates stay in place, a change that does not expire.

Defunding Medicare for Tax Cuts: The latest was this big takeaway Republicans could use later on to make the argument Medicare is going broke...thanks to them: 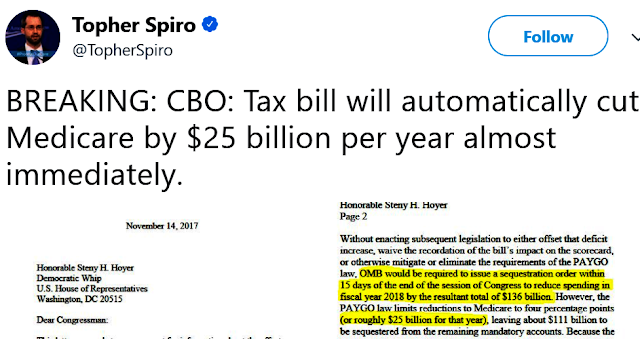 
The (repeal of the) individual mandate raises a lot of revenue for the tax cuts ... CBO estimates it would save the federal government $338 billion over the next 10 years ... comes from people losing insurance. When fewer people have insurance there's less money the government has to spend on subsidies.

You'd see something called a death spiral; with the healthy people exiting, the rates go up and up. A few states tried to do health reform without a mandate; Washington state in the 1990's ... they had a death spiral happen, and they had no insurance companies willing to sell coverage to individuals by the end of that experiment. We know that it doesn't work very well.

What else is targeted to help pay for tax cuts for the wealthy and corporations?

A Trojan horse: It would establish the proposition that a “better” inflation measure exists and should be employed across the government. Even if this specific legislation doesn’t touch Social Security, make no mistake: It puts Social Security under threat.


The Centers for Medicare and Medicaid Services essentially wipe out steep and long-term drug discounts received by charity and rural hospitals ... last month’s rule change to the 340B program (cut) $1.6 billion to the federal drug discount program known as 340B. Hospital leaders also contend that the latest rulemaking adds to an already confounding regulatory arrangement.


"Marketplace," hosted by Kai Ryssdal, featured on a 11/09/2017 show the quote "That's the end of research in the United States," said by policy analyst Barmak Nassirian  when he saw the tax bill. He was thinking of the graduate students who work as research assistants and take advantage of certain tax breaks to offset the cost of their education, which is one of the deductions Republicans working on the bill are looking to slash.

Taxing Endowment Earnings used to fund undergraduates from low income families: In the words of conservative George Will looking out for private colleges:


A 1.4 percent excise tax on the endowment earnings of approximately 70 colleges and universities with the largest per-student endowments ... to raise less than $3 billion in a decade ... Princeton University’s endowment earnings fund more than half its annual budget and will support expansion of the student body ... They also enable “need-blind” admissions: More than 60 percent of undergraduates receive financial assistance; those from families with incomes below $65,000 pay no tuition, room or board; those from families with incomes below $160,000 pay no tuition. No loans are required. PhD candidates receive tuition and a stipend for living costs. It is astonishingly shortsighted to jeopardize all of this, and it is unseemly to do so in a scramble for resources to make a tax bill conform to the transitory arithmetic of a budget process that is a labyrinth of trickery.