BYD, or "Build Your Dreams," build batteries and electric vehicles now in China, with government subsidies. China is determined to be the leader in electric cars and the required technology.

That's just the opposite of Trump's plan to repeal all subsidies, and world leadership.

While China invests and is helping develop world leadership in hybrid and electric vehicles, Trump is betting his business reputation on tax cuts and big oil:

Union of Concerned Scientists: The draft tax bill released today by the U.S. House Ways and Means Committee would eliminate the electric vehicle tax credit, axe the permanent 10 percent Investment Tax Credit for solar and geothermal power, and reduce the Production Tax Credit for wind power by more than a third.

Michelle Robinson, director of the Clean Vehicles Program at the Union of Concerned Scientists said, “It’s a mistake ... Electric vehicles are a new industry, and the electric vehicle purchase incentive has been a vital part of getting it off the ground. We should keep these incentives in place to make sure that more drivers can take advantage of the benefit of driving electric. Instead, this bill would drop the incentives completely and immediately, throwing the market into disarray.

“Taken together, these changes would increase pollution and undermine America’s leadership in energy innovation. We’d squander the progress we’ve made. This bill would set us back at a time when we need to build cleaner transportation and energy systems to fight climate change and create jobs that will last into the future. Ultimately, this tax plan is a bad deal for most Americans.”

Walker works at a state level accomplish similar results: I  still can't get over one Republican-designed punishment for environmentally concerned owners and purchasers of hybrid or electric vehicles. Remember, this would be on top of the new $150 fee for hybrids/$175 for electric vehicles passed in the budget:

The thing is, hybrids users in Wisconsin will end up paying for replacing/repairing Wisconsin roads, while drive through traffic from out of state won't. See my previous post.


I waited 15 years for hybrid vehicles to become affordable used cars, and now I get socked for my patience?

Hybrid and EV sales are taking off and recognized as not just the future in transportation, but a job creator as well. But instead of embracing a cleaner way of getting around and the new economy, we've joined a small club of states penalizing progress: 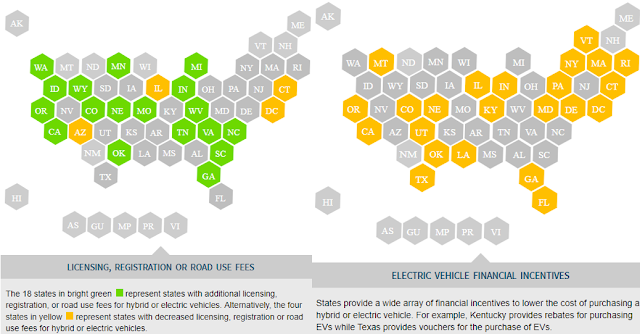 At least thirty-four states and the District of Columbia offer incentives—as of July 2017. Some states, such as Connecticut, Illinois, and the District of Columbia have reduced annual registration fees for electric or alternative fuel vehicles. Eighteen states, however, have imposed additional annual fees for the registration and licensing of certain hybrid and electric vehicles.

Most of the alternative fuel vehicles in Wisconsin are hybrid-electric, and most of those exist in Milwaukee County, where there are between 150 and 200 such vehicles per five square miles, according to the federal data. There are between 50 and 60 hybrid-electric vehicles in Dane County per five square miles. In Waukesha County, there are about 40-50 vehicle owners in the same size area and 10-20 vehicle owners in Winnebago County. Those four counties also have the highest number of electric vehicles, according to the data.

Promoted at MGE's website, this is just a preview of what's to come: 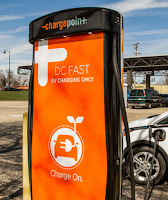 MGE: Wisconsin has seen more than a 50 percent increase in electric vehicles purchases since 2015, and six new electric models are expected in 2018-2019.

According to an article on forbes.com, U.S. sales of EVs "soared" in 2016, increasing 37% compared to 2015. When drivers plug in at our charging stations, they are fueling up with 100% renewable electricity produced by wind farms in Wisconsin and Iowa. Fast chargers can charge a fully depleted, standard EV battery to 80% in about 30 minutes for travel up to 90 miles.

The Bolt can travel on battery up to 238 miles! Think of how many miles you travel each day. And, it's quick! The Bolt can go zero to 60 miles per hour in fewer than seven seconds, so you're not sacrificing performance by going all electric.

Research by Bloomberg New Energy Finance puts the number of EV models at more than 120 by the year 2020! Car makers are investing heavily in developing EVs of all types.