The GOP tax cuts are a con, filled with little middle-class tax increases over time, that no one will notice but will still feel frustrating...making Americans beg for even more cuts. 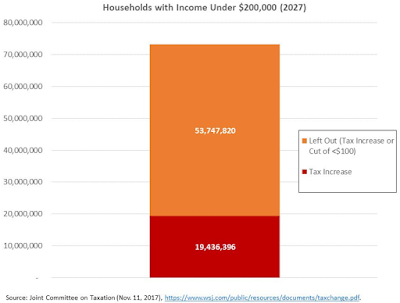 Promoted as needed relief for the middle class, the Senate Republican tax overhaul would increase taxes for some 13.8 million moderate-income American households, a bipartisan analysis showed Monday.The analysis found that the Senate measure would actually increase taxes in 2019 for 13.8 million households earning less than $200,000 a year. That group, about 10 percent of all U.S. taxpayers, would face tax increases of $100 to $500 in 2019. There also would be increases greater than $500 for a number of taxpayers, especially those with incomes between $75,000 and $200,000. By 2025, 21.4 million households would have steeper tax bills. The analysts previously found a similar magnitude of tax increases under the House bill.

If that wasn't bad enough, Americans will be paying more for everything relating to health care, thanks to "spending cut" on the federal level, that shifts the burden to the sick:

Joe Grogan, director of health programs at the White House’s Office of Management and Budget ... essentially wiped out steep and long-term drug discounts received by charity and rural hospitals ... easing reporting requirements for doctors ... exempting more employers from paying for birth control to rolling back drug discounts — have Grogan’s mark on them in some way.