Trump horrors at the EPA you won't believe, again!!!

Republicans have made their one big talking point meaningless, that Democrats believe the government is the answer!!! Ah, not anymore.

Where Democrats used to think the government in some cases could provide a solution to serious problems affecting Americans (like health care, clean air, water, and food), Republicans have reversed that perspective now by hiring unqualified agency administrators and employees to federal departments tasked with oversight.


Administrator Scott Pruitt is shaking up the EPA's Scientific Advisory Board: Pruitt has moved in a roster of 18 new people who will now make up about half of the agency's 44-member committee.

That doesn't bode well coming from an opponent of the environment. Here's who is in control now:


1. The new chair of the board, Michael Honeycutt — the director of toxicology at the Texas Commission on Environmental Quality — suggested EPA air quality regulations and ozone limits are unnecessary, because Americans spend 90% of their time indoors, anyway.

2. Robert Phalen, a smog researcher who once famously said that modern air is “a little too clean for optimum health.” He claims children’s lungs need a few irritants to grow hearty, and that pollutants like coal are good for lung defenses. Phalen told the American Association for the Advancement of Science in 2012, "My most important role in science is causing trouble and controversy." Air pollution is killing one in six people around the world, and it's more deadly than smoking, wars, malnutrition or obesity.

Just this week, schools in New Delhi had to close because Indian officials said the city has become a “gas chamber” engulfed in thick smog. In the US, though, air pollution rates have dropped more than 70% since 1970 — the year the EPA was founded. 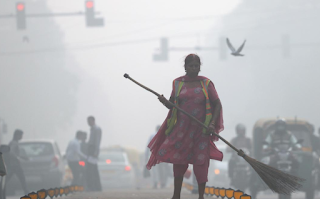 In it's typically soft coverage of this outrageous adult behavior, the media weighed in:

In a letter signed by dozens of Democrats and at least one Republican, lawmakers voiced concern that Pruitt's changes might compromise the agency's ability to seek out "objective, independent scientific expertise."