Right wing losers, the kind who text pictures instead of their thoughts, are jumping on board Turning Point USA's simpleton messages; "Socialism Sucks," "You PC Bro," and "Big Gov Sucks." It's a group that skirts the line between parody and mind-numbingly disproved right-wing cliches.

It's pretty obvious Turning Point USA doesn't really have anything to contribute to the dialog or goals of educators at our state college campuses, yet they've just become "an official student organization on the University of Wisconsin-Stevens Point campus. Thanks to loud organized whining.

Before I get to why something this idiotic happened, take a look at one of their big issues, socialism. They've taken the many different historical versions of socialism and conveniently condensed them into one slogan:

Fascinating? And this adds to the "marketplace of ideas?"


The UW-Stevens Point College Republicans issued a statement "The student government of UW-Stevens Point should be held accountable for their blatant disregard for freedom of speech and the free marketplace of ideas on campus."

Let's have a Civil Discussion in the "free marketplace of ideas?" Nothing says civil like "crush socialism" and "100 million dead." These are the thoughtful words of founder Charlie Kirk: 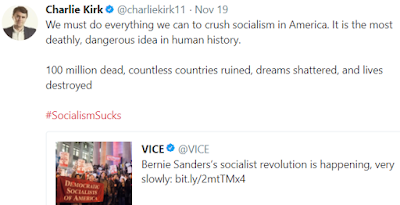 According to "Knowyourmeme," Kirk is responsible for trying to ban and intimidate anyone who
disagrees with his "Socialism Sucks" movement:

Turning Point USA is a non-profit political outreach and activist organization focused on conservative and right-wing causes. The company and its founder, Charlie Kirk, have been at the center of numerous controversies, including The Professor Watchlist.

Liberal professors are on notice regarding their own free speech rights...


“The mission of Professor Watchlist is to expose and document college professors who discriminate against conservative students and advance leftist propaganda in the classroom.”

Because right wing ideas, cliches and slogans could never be propaganda. Here's Kirk taking on those infuriating "safe spaces" on campus, an idea someone shouldn't have been free to create:

But that's not all, Charlie Kirk's contribution to higher education also includes the following list of topics he would outright change for everyone: 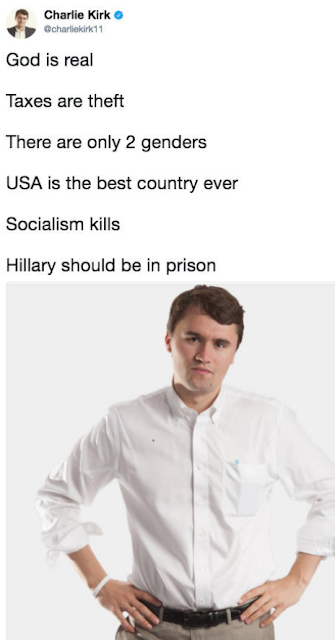 Free Speech, Nope: In Nebraska, Turning Point USA got "free speaking" university staff fired. It really has everything to do with right-wing political correctness.

Turning Point USA's campus presence is a bit ironic, since they promote anti-education rants like this from PragerU...

What is PragerU? I'm not sure but they teach "values" "with the intellectual ammunition" you'll need to "crush" socialists...


PragerU, founded by Dennis Prager in 2011, is a not-for-profit organization that helps millions understand the values that shaped America and provides millions of Americans and people around the world with the intellectual ammunition they need to advocate for limited government, individual responsibility and economic freedom.

What really got me going was this poster supposedly pushing free markets and capitalism. Turning Point USA must not understand how health care insurance works; you pay a premium, it gets added to everyone else's payment, gets paid out to the sick and in the form of wages and company profits. Yes, bring them on campus...? 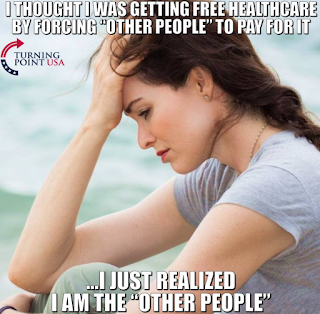 Here's Charlie Kirk droning on with his simplistic stale talking points, followed by a YouTube comment that "dismantles" Kirk's premise:


Social Capital3 months ago (edited): Two can play this game: Do you trust big business? Then why do you want to make it bigger? If you don't like monopolies and don't trust cronies, then why would you want to give more money and power to those same companies that stifle competition and small business growth? "But what about corporate welfare"? 9/10 conservative politicians are more interested in cutting welfare programs for the poor than they are for the rich. In English: This "small government" rap is a ruse. Conservative politicians have been some of the biggest advocates for big government and big business in our nation's history.﻿