Media Tracker’s Brian Sikma is a real piece of work. Many years ago I had a friend who used his fake cluelessness as an excuse to get away with saying the dumbest things. Sikma reminds me of him.

Sikma couldn’t resist taking a shot a veteran turned away when he tried to vote. 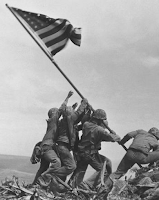 A veteran who fought at Iwo Jima in 1945 and who, for the first time, was denied his right to vote thanks to the state’s voter ID law being in effect … was brought to light because his niece, Justice Ann Walsh Bradley of the state Supreme Court, wrote a letter to Gov. Scott Walker outlining her displeasure over the situation and her opposition to the law. Bradley was among the minority of justices who dissented from the Supreme Court’s decision to uphold the law. Leo Olson of Reedsburg, tried to use his veterans ID card ... but that form of identification can’t be used under the state’s voter ID law.

Who would have though a veterans ID card wouldn't be enough: Sikma is quick to blame a veteran for not getting another ID:

Of course Sikma skipped blaming Republicans for purposely excluding the veterans ID card in the first place, while acknowledging the legislatures sudden plan to reinstate it, now that the shit hit the fan: 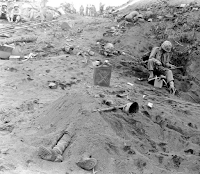 Marley did point out that state law could be changing soon to allow veteran ID cards to suffice for voter ID purposes.

Oh, and don't fund the elections board to pay for an ad campaign to explain the new law. Anyone see billboards, newspaper ads and television PSA's detailing the process? Nope, so Sikma decided to lie:


While the story of a veteran not being able to vote tugs at heart strings, it is hardly the fault of the law. The Government Accountability Board has spent a significant amount of time and money on a public awareness campaign emphasizing a valid ID.

Biting the (Vets) Hand that feeds them (votes): What the heck is wrong with veterans in their 80's, not doing their research, scouring every page of information, and jumping through a few "minor" hoops so they can vote? Why didn't Leo Olson think to check out...

Marley noted that the veteran’s wife was upset because her husband’s Veterans Administration card didn’t work for voter ID purposes ... the VA itself emphasizes on its website that VA cards function as enrollment and identification cards for VA services and may sometimes be used as ID cards for travel. However, the VA carefully notes the card is not a substitute for other forms of identification.

And why couldn't Olson just go through the process all over again to get an ID requiring the same documentation he used the first time applied for his veterans ID? Common sense-like...


Fascinatingly, the VA requires veterans to undergo a rigid process to prove their identity before getting a VA card. In fact, if you can get a VA identification card you have what it takes to get a free Wisconsin voter ID card. The required documents to obtain a VA card are listed here, the required documents to get a Wisconsin voter ID card are here. The lists closely parallel one another.

Sikma is one sick dude. This reminds me of the Republican Medicare plan to force seniors into shopping every year for the best deal on health insurance, as if the problems with mobility and declining mental alertness simply don't exist for the aged.

Like I've said before, someone should require a recordable ID process and signature for all gun purchases. Let's see how long that small inconvenience would last.
Posted by John Peterson, Democurmudgeon at 2/26/2016 11:10:00 AM