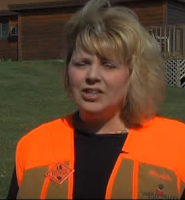 Scott Walker's shopping mall for hunters who don't have a lot of time, game farms, is another administration effort to privatize a very popular public sport.

To the left is DNR Sec. Cathy Stepp in a Wern Valley game farm vest prominently featured in the state's "Deer Hunt 2014" video. That's not all, the shows host...

But there's not just money to be made by the game farm industry, its also a great place for would-be politicians and Supreme Court Justices who don't have a hunting license to get a gun toting campaign picture, like the photo here of Justice candidate Rebecca Bradley. JS-Marley: 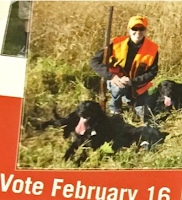 The photo was taken in November at a Waukesha game farm, where hunting licenses aren't required. Rebecca Bradley made an implicit appeal to hunters … baseball cap emblazoned with the initials of the National Rifle Association. State Department of Natural Resources spokesman George Althoff said there is no record of Bradley having a hunting, fishing or boating license in the past five years.

Bradley for some reason wouldn't say where she stands on the now decided 2nd Amendment decision by Justice Scalia, which in Republican world means she's all for it, but Justice candidate JoAnne Kloppenburg offered a more insightful detailed view:


"What I can say is that Heller does demonstrate that a judicial philosophy that claims to hew to the original intents of the men who wrote the constitution 250 years ago does not by itself resolve complex legal questions. Both Justice Scalia in his majority opinion and Justice (John Paul) Stevens in his dissent reviewed the text and history of the disputed Second Amendment language. Justice Scalia chose to place less weight on some of the words in the Second Amendment as compared to others and so reached a decision that some legal scholars contend was consistent with Scalia's own ideology rather than with an originalist reading of the constitution."